According to Norse mythology, Valhalla is located in Asgard and is a heaven-like hall for warriors slain in combat. Upon death, the chosen are led to Valhalla by the female figures known as Valkyries. There, under the rule of Odin, they will prepare for the future battle known as Ragnarök. In the High Sierra, Valhalla is a cirque of steep alpine walls, famous for the massive formation known as the Angel Wings – one of the tallest and most massive walls in the range. There is no surprise the biggest names in the American, as well as in the local climbing community have tried or did put up routes on the magnificent formation - Galen Rowell, Fred Beckey, Peter Croft, John Long, Peter Mayfield, EC Joe, Dave Nettle, Richard Leversee, Urmas Framosch, Allen Steck, Les Wilson, Jim Wilson and many more are part of the rich history. The High Sierra’s own Asgard.
Incredibly scenic, rich with mystery and possibility for adventure, it was the next logical step. Armed with Luke, a good friend and a strong climber, we planned a seven day trip. We had two cruxes: our high drive to climb EVERYTHING and lack of mules for the approach. The second crux was solved when we found out our friends Mike and Walker are hiking out to climb the Valkyrie (V 5.11+/5.12-) over the weekend. "How about you guys hike the rack and the rope in and we hike it out?" We had a deal. The desire to climb EVERYTHING remained.

Day following the scenic approach Walker and Mike climbed their objective and we scoped out a potential new route on the West Buttress of the Angel Wings, after which we had enough time to continue on to scramble the Saber Ridge.
The weather forecast was not ideal but soloing makes the climbs go by fast and we were back at camp by the time the shit hit the fan. It was the 4th of July weekend and we were getting one of the best shows imaginable. Water grooves on Cherubim dome turned into raging waterfalls and hail as large as your typical grape pounded us in camp. While we were enjoying the show from the tent, we knew our friends are climbing the Valkyrie so we were fairly nervous for their safety. Both of them are strong climbers that have freed multiple El Cap routes so turned out they topped out at two pm and climbed only the last pitch in the light rain. When they got back to camp a few hours later we were both excited to see them unharmed and impressed by their speed.

A few words about the Saber Ridge: DAMN!!!! That thing is awesome. We were climbing with GIANT smiles ALL DAY. Features on the crest were awesome and the rock climbing was fantastic. It was more fun, more sustained and in a better setting than the Matthes Crest, in my opinion. Not twice as long as some people say but about the same length as the full Matthes traverse. Has a short 5.7-8 crux near the beginning and continues up mostly 4th and easy 5th scrambling up the crest. Exposed at all times...and again, mega fun! Both of us thought it was a 5 star outing.The following morning we hiked to the base of the Golden Pillar - the beautiful West Buttress of the Angel Wings. If you looked at the photo and immediately guessed that Fred Beckey has climbed it, you are partially right. Fred along with several people climbed a route that starts on buttress. The proj took them several trips over a multiple year span to complete. The route starts by a giant Jupiter tree and traverses off the Buttress proper to finish in a giant chimney system to the east of buttress proper. The lack of a route that would ascent the buttress proper was something I was eager to fix. 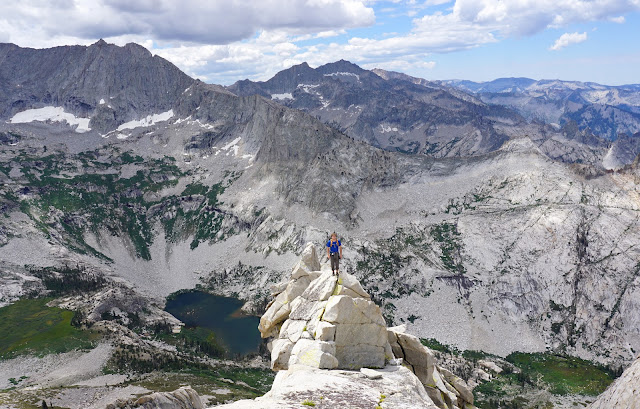 The day after a fairly large storm we started up the line we looked at the day prior. The beginning turned out to have a scary move off the deck. I placed a few microcams in a thin flake and cranked into a dirty layback. In addition to dirty, it was running with water and the cam I was able to fiddle in pulled out two times before I found the position in which it held a mild yank. I did not know how well it would hold a fall, but that was the price of entering the crack system above. I was not planning to fall on my last piece, so I executed the next moves to the belay without a f*** up. Luke took the next lead and found a BEAUTIFUL corner that went at mid 5.11 and would be a classic at the cookie cliff. Laybacking, short wide section, a beautiful hand crack and a section of techy crank fest to reach a belay stance. The following pitch started out from a fun layback to a giant loose block, which is now gone. :) It continued into a short chimney and 50 feet of splitter hand jamming in a corner. We were getting lucky with the quality, but the real difficulties begun on the next pitch. After a bouldery start Luke had to do a bouldery 5.11 moves off a big ledge. He likes his ankles and I was on top rope, so we both sent.

The following pitch was the blank crux that we expected. Two crack systems we have scoped from the ground were separated by 100 feet of steep blankness. We dubbed it "the A5 traverse" before it was even climbed. It was my lead - make it or bail type of a pitch. In the beginning I mantled to a ledge that had a crack I could slide the widgets into but it ran into nowhereland which had some features that to my surprise, possibly, seemed free climbable?! I hooked a sloping feature and drilled the first bolt. Hard face climbing got me to another desperate stance but my single hook was not working well for the only hookable feature. I tried to drill at an angle and it seemed to work well till the thing popped. I took a swinging fall back to my last bolt and climbed back to the stance. What I saw was a pleasant surprise, the thin edge of a flake turned into a solid crimp which I was able to hook and use as a solid hand hold when I returned into the free climbing mode. Several thin moves past the bolt got me over to the easier terrain which offered some shitty gear under a rotten flake. Luke followed the pitch free and swong into the next lead – a steep flake system with all sorts of cruxes along the way. Following the pitch in the blazing sun and swinging into an OW crack got me worked enough - to my disappointment the system above did not look much easier.

Luke fought with another difficult flake system till popping his own hook while drilling a bolt. To our surprise the gear in a Wheat Thin-like flake held his fall. However, the terrain above looked blank. After fighting the sustained pitches, most of which were in the 5.11 range and killing precious time on drilling, both of us were worked and dehydrated. About half way up the wall, we decided to bail. Due to our physical condition, it was an easy decision. Both knew that a ground up in a day first ascent on the Angel Wings would be a rare achievement, which on that particular day we were not gonna get. The following day was supposed to be the day we rest and regroup. We managed to rapell to the base without doing anything TOO crazy, depending who you ask. It was the time to take off the ankle burning climbing shoes and sort the rack. Last task was pulling the rope. It went well, till the end of our tag line created the knot. To our disappointment, the knot jammed on top of the second pitch and our sad faces did nothing to free it. “I guess our rest day will not be as restful as we’d like.”
Posted by VividReality at 1:44 PM