Two hard days of climbing took toll on our bodies. Our fingers were especially trashed, so we decided to climb one of the best crack climbs in Red Rock – The Warrior. Alix and Jim joined the party and we ended up having a blast climbing the route as a party wall. People on Mountainproject made the approach sound fairly intimidating but we ended up getting to the base in an hour and a half.


“There a different kinds of approaches for the classics of RR. There are long ones(Rainbow Wall), confusing or complicated ones(levitation), strenuous but straightforward ones(Cloud Tower), and then there are approaches where you arrive at the climb so exhausted from such heinous schwaking and mandatory 5th class groveling up chimneys and moss slabs it seems like a 5 pitch extension of the climb itself(Warrior).”

–Dramatic description of the approach from MP

The route itself was fairly fun. First five pitches involved fun chimneying, awesome fist jamming and a climb through a giant bird nest. When I was leading the bird nest pitch the bird went nuts and I thought it was actually a pterodactyl. Fortunately I survived the pitch and was able to onsight the crux (5.11a fingers/stem), which involved a long 5.8 runout for some added excitement. My favorite pitch of the route was probably the long 5.10d fist-jamming corner that Luke got. His excitement didn’t end there since he led the last two pitches that had giant runouts on your typical Red Rock crumble. In any case we thought those pitches were actually solid and fairly fun. Alix and Jim were perfect models and we took a gazillion photos of them climbing. We ended the day at Four Guys and Yogurtland. Everybody sent, everybody had fun everybody got their stomach full (as I remember by the time I was done with half of my burger, Alix finished two!) and we can 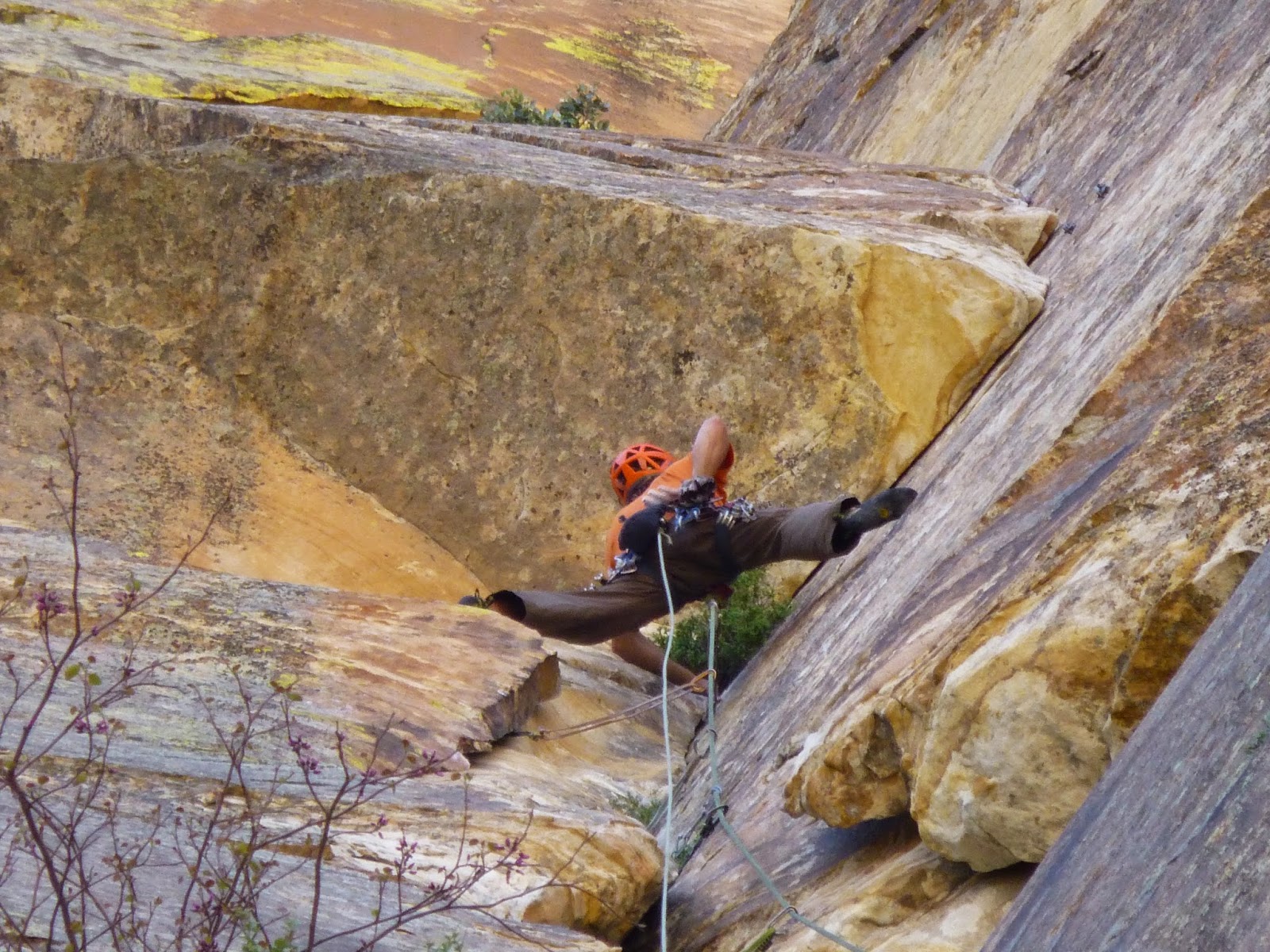 probably agree it was a really fun day!

Next up Luke and I took a rest day before going up to Challenger wall and climbing Jupiter II. The run-outs there gave both of us some mental stimulation. The physical stimulation was also there, seemed like the routes were a little less soft and not fuzzy at all. For me, low point of the trip was being frozen in a stance, unable to make a slabby move with a tiny sloping slippery crimp. The foothold I was standing on was not at all where I wanted it to be and I wasted about ten minutes trying and getting frustrated. To my surprise I did not fall and I stuck the move in the end. The frustration I got from being unable to move had me close to a full on meltdown. In any case, Luke wrote about the day of climbing at the Challenger HERE.  Last day of climbing at Red Rocks was one of the best. Even though Luke has done the Rainbow Wall on a prior trip, he was game to get on Rainbow County. It avoids the easier pitches of Rainbow Wall and substitutes them with two pitches of mid 5.11, one pitch of 5.12 and the crux 5.12+ pitch. On this day, I was able to crush only a few things. One of them fortunately was the approach. I did sent a few 5.11 pitches on the route, but I wasn’t even close to getting the 5.12+ pitch on Rainbow Country clean. 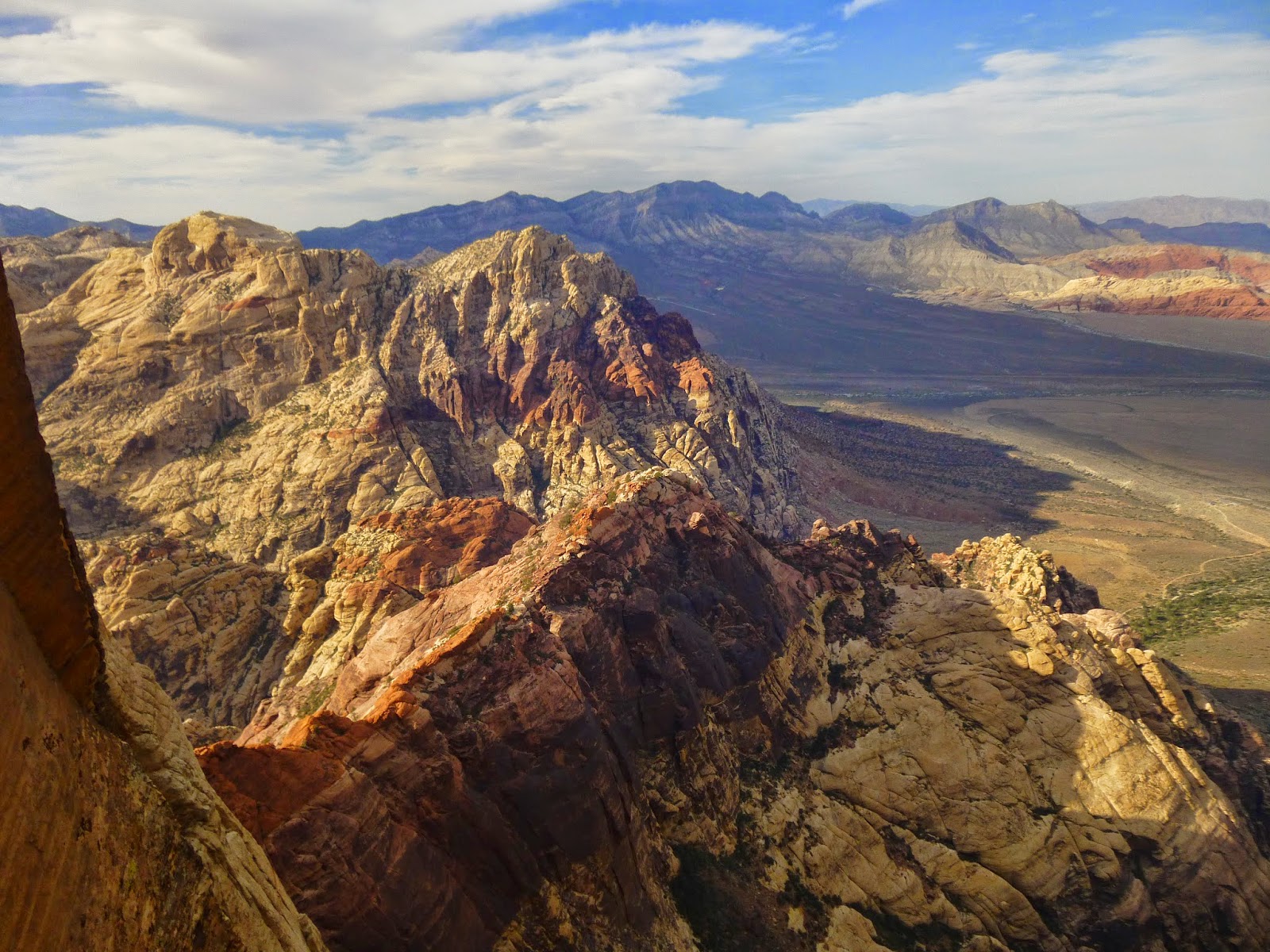 Having climbed 10 pitches up to 5.12+, only one of which was a 5.10, I did not manage to lead the crux pitch of Rainbow Wall clean. Not enough juice. But even with a few hangs in the lower section I put up a fight and was happy about putting together the moves to get through the middle and upper sections of the pitch clean. Small victories also matter. The route was one of the best I had done in my life and I can't wait for 2015 to give Rainbow Wall a try. Crux pitch of Rainbow Country seemed way above my head, and it will be at least a few (or 10) years till I have any desire to lead that.

Posted by VividReality at 1:54 PM No comments: