The Watchtower - Moonage Daydream (Round 2) + Video

After climbing ‘Moonage Daydream’ for the first time, I was impressed with quality of climbing, length, scenery, and happy about absence of crowds in this region. The climb is located literary an hour out of the parking lot, but offers sense of a remote adventure.


Also, I became curious about history of it’s First Ascent and in the meantime was able to gather that it was done by John Paul Hudson (who worked in Sequoia as a park ranger). According to my source he did it sometime in February of 1984. Identity of his partner is still unknown to me at this time. Hopefully someone with more information could fill in the gaps.

Video Hamik put together from a bunch of our clips:

My new friend Adam (AKA Burchey) and Casey were planning another attempt at Moonage Daydream, about a month after we (Adam, Mike, and I) climbed it. Tired of lapping big walls of Yosemite (sarcasm), I called up my old climbing buddy, and he was in like a jelly bean. Since Hamik has not climbed this route prior, he was also awarded with the crux pitch (when first pitch is in thin/mixed conditions it feels M4-5ish, and is super fun). In the end, we had a different experience compared to our first trip, but again Moonage delivered loads of fun and excitement. 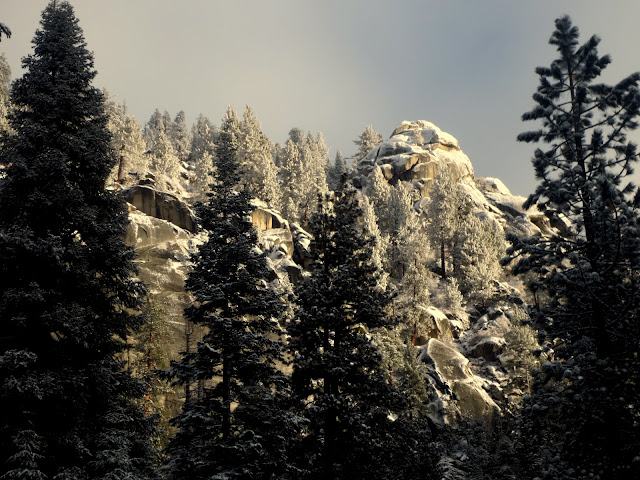 With almost a foot of fresh snow that fell a day prior, the scenery in the canyon changed. Trees and granite domes had a fresh silver dusting – It felt like real winter again – such an anomaly this season! It wasn’t only scenery, the approach changed too. As soon as we hit the hills we were breaking trail through waist deep powder. “The hanger” we spotted on our prior climb was also gone. 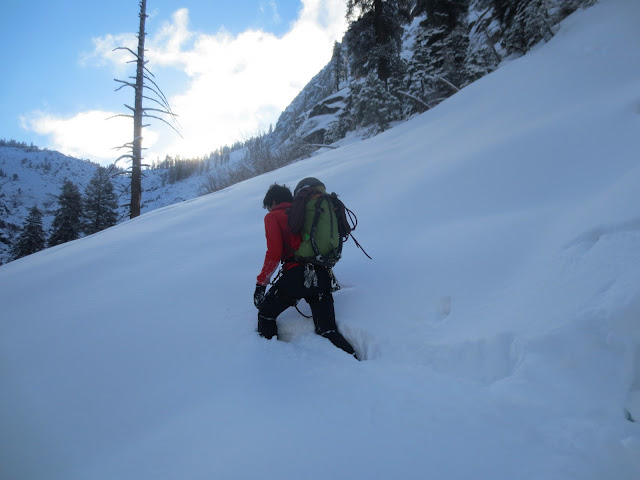 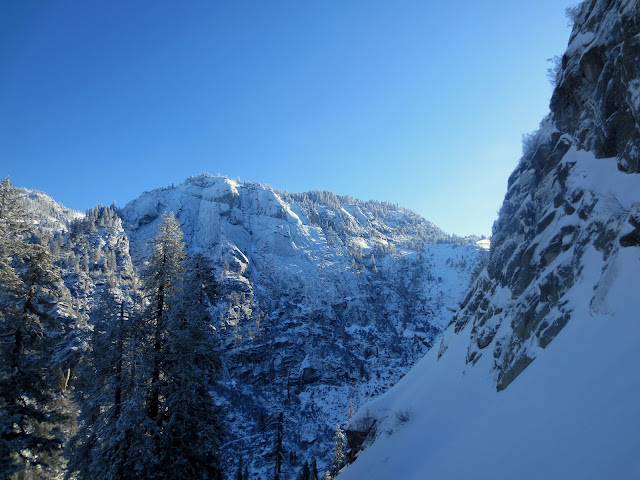 Hamik soon racked up and was on his way up the business of the climb. He moved with caution over strange ice growths in the beginning and was rewarded with a bit better ice higher up. This time initial corner on the right had thick enough ice to take a screw. However, upper part of the pitch was still the crux with thin mixed climbing through ice, rock, dirt, and plants. Since I was ‘only following’ and wanted to prevent Adam and Casey from freezing (waiting for us to finish the pitch), I rushed up it without enough precaution.  I was sloppy, and got punished for it by my tool - it blasted me in the face. Like a real nurse I placed a chunk of ice on the wound to stop the bleeding and prevent swelling. It worked and I resumed climbing to the top.

Since I don’t usually let small f-ups prevent me from having fun on climbs, I took the next pitch and picked a steeper variation than what we took on our prior ascent. After stretching the rope for full 60M pitch I made it (barely) to a rock with a few placements to set up an anchor…a very alpine anchor. : )

Posted by VividReality at 9:49 PM 3 comments:

On Saturday (04/06/2013), Hamik and I day-climbed SW Face of Liberty Cap. It was our second 'little' big wall that we have climbed together in a day (first was the Prow in the end of 2012). Both of us liked the climb for several reasons. It had amazing views and had a good amount of free climbing. We were able to free climb up to 5.10c on this route. Even though Hamik won the coin toss for free climbing pitches 1-3, I followed these pitches free, instead of jugging.
We happened to climb this route after a few storms, but found it to be reasonably dry- aside from a few spots. 5.9 finger crack was especially wet, and felt more difficult than the 10c crux further up the pitch (which was dry). Since I ripped off a chunk of skin on Butterballs a day prior, this section was especially heinous. Friday was a rough day in general, it included several OWs that left me sore, and battered. Climbing Vendetta (at Cookie Cliff) was a pleasant change from the usual circuit. Leading the OW pitch on that climb clean raised my self esteem, before Generator Crack slammed it down.

My block on Liberty Cap started from the bolt ladder pitch. Next time I do it, I will bring more than two rivets haha. Climbing was going fairly smooth in general. C2+ section on the following pitch was defeated by free climbing past it. Top of this pitch finished on a 10x1 ledge. Chimney prior to this ledge has a HUGE block that is not attached to anything. It was actually pretty scary to use it, and I would strongly suggest not to pull on it. It can kill your belayer, easily.

We moved the belay to the bottom of the chimney, after which I took a pendulum left, instead of going for C3 variation. This pitch had a really cool 10a fists through a roof section which I was able to free. After this bit of free climbing you end up on a nice ledge with a great view. Highlight of pitch 8 was not C2+ section (which I mostly free climbed through after using a hook), but me taking a 40 foot fall after a cam I transferred my weight on blew. I was standing on the smallest metolious offset- which was a body weight piece, and did not hold neither.
Since I back cleaned a bunch of gear prior, it was a long one. Would be interesting to know if any tourists enjoyed the show. I was unhurt and got back to business. I learned that cam hooks are a lot more bomber than bodyweight microcams in wet/dirty cracks, even if you have to 'dig out' your placement. On the next pitch I took it to the top of "Manzanita nightmare," from which Hamik took us to the top. He did the last 5.8R pitch in the dark like a champ. I guess climbing at Tahquitz taught him a few things!

Since we did not top out in time for a romantic sunset, we had to figure out the descent in the dark, with one headlamp. It wasn't easy, but not incredibly difficult. By 11pm we got back to our car. It took us over 12 hours to climb the route, and about 17-18 hours car to car (with retrieving a pack we left at the bottom of our route). I guess we did not pass the "climb SW Face in 10 hours-climb the Nose in 18" test.

After two full days of climbing, I was not psyched to do more of it on Sunday. However, I love Yosemite and wanted to do something active. My choice was a good one- running/hiking to the top of Upper Yosemite Falls. Took me 52 minutes to get from camp 4 to the top, which was 20 minutes quicker than in Summer 2012. Falls were as full as I have ever seen them and the views were gorgeous, as always. Afternoon was spent in El Cap meadow talking to tourists, friends, and staring at massive formations of rock all around....'Nose in a Day,' is it doable for me NOW? I guess there is only one way to find out.

Posted by VividReality at 3:04 PM 4 comments: