First ice/mixed climbing trips of the season usually feel rough and shaky, at least to me, so we decided to spend out first day in Hyalite mainly drytooling, in order to get the feel of the whole process again. And I say process because at times mixed climbing feels like aid climbing, or at least a little less natural than rock climbing. Scary medieval axes in your arms, connected to the harness with leashes, screws, draws, cams, spikes on your feet. Good luck not stepping on your rope and not wrapping the leashes all around the tools on the crux. A good time to smile and remind myself that grace is work in progress. We finished the day by both leading the Matrix and planned an outing to attempt the SUPERFAT Matriarch on day two.
When we got to the base of the Matriarch, we found a team of 4 climbing it with one guide. 21 Stitches (M8 WI6) however was in as well, so we decided to try that. There was a party ahead of us and I tried to gather all the beta on the crux, as the leader was trying to get through it. Watching him fall 5-7 times and break a nice looking blob of ice at the lip was not encouraging, but guys that just got off the route made it sound more attainable. Aivaras led the direct start to the route (at m6 wi5?) and I led the 2nd pitch with the dreaded M8 overhang. To my surprise I onsighted both, but just barely. After pulling the strenuous crux (you are basically doing one armed pull ups through the overhang, as you have no feet to edge on) my bicepts started to cramp and I nearly ate shit on easy ice. That would be a painful bummer. I continued to rock climb left on big blobs and clipped a few bolts before making a transition to a hanging dagger. The position was truely wild. Dagger grew larger and offered a few stemmy rest stances. After getting to the top I witnessed a beautiful sunset as I was belaying Aivaras. Even though we hiked out in the dark and I had to pay a 50$ late fee because I demoed some ice tools and brought them back late, it was still very worth it in my mind and I was pretty psyched we got on a world class climb that we have not even planned to get on.
The third day begun with a romp to try the Killer Pillar, which was climbed by another party in front of us and led by Aivaras after. It was pouring with water and in order to suffer a little less, I even asked him to remove the screws that he placed as I lowered him. It was a cold and wet day, which we ended by climbing the mixed route to the right. It was very nice, with a few smears of ice but damn difficult for m7, not that m7 is supposed to be easy. :)
We did two more days of mixed cragging, which was mostly about working out and getting really really pumped. On one of those, we did something like 8 laps on a great route that used to be rated as an m7+ but has been upgraded to m9 in the new guide. For two of those laps I wore a 25lb backpack and was able to complete the climb clean. The following day was frigid cold, my body felt worked, I climbed like shit and decided that two top rope laps was more than enough. Highlight of the day was watching a few guys climb the Nutcracker across the canyon. That route, along with the Winter Dance, are on my WANT TO CLIMB list. I hope one day, the dream will come true. :) A fun and productive trip overall! 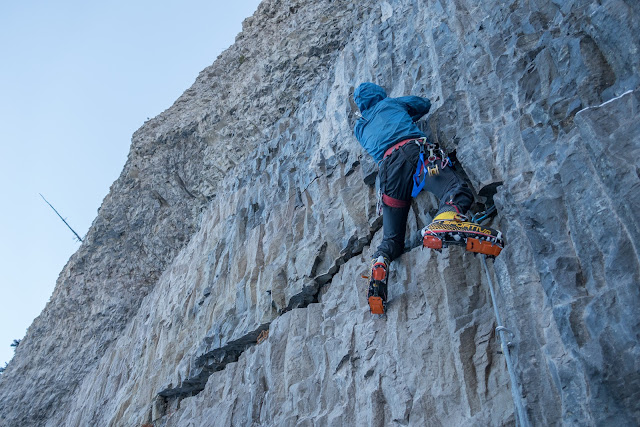 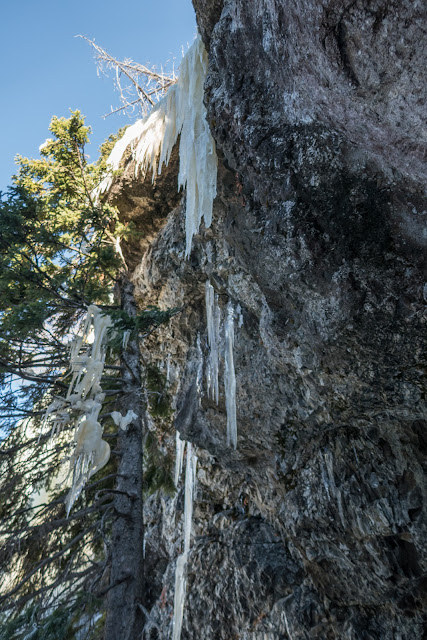 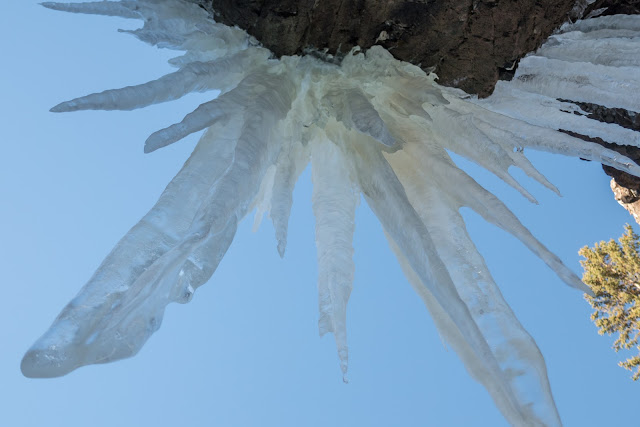 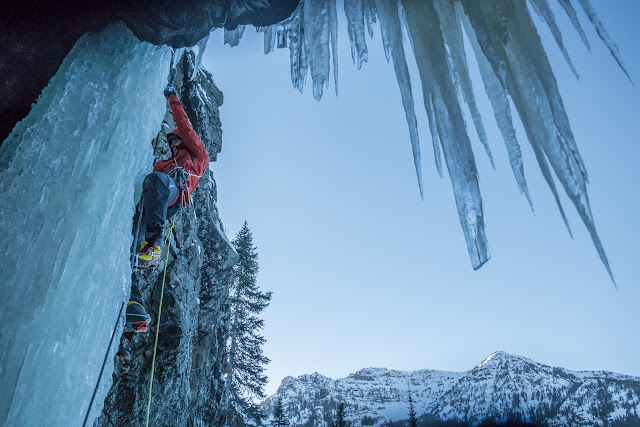 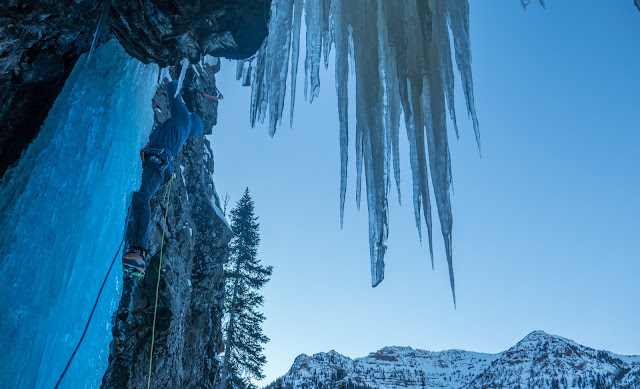 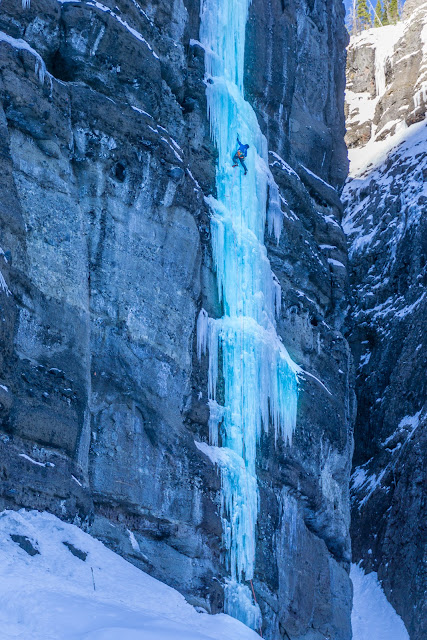 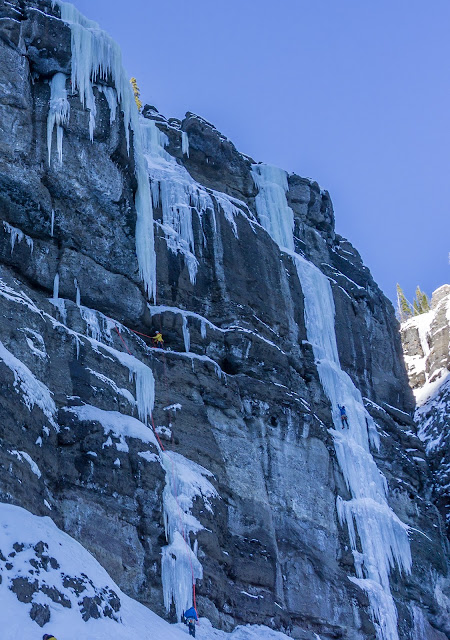 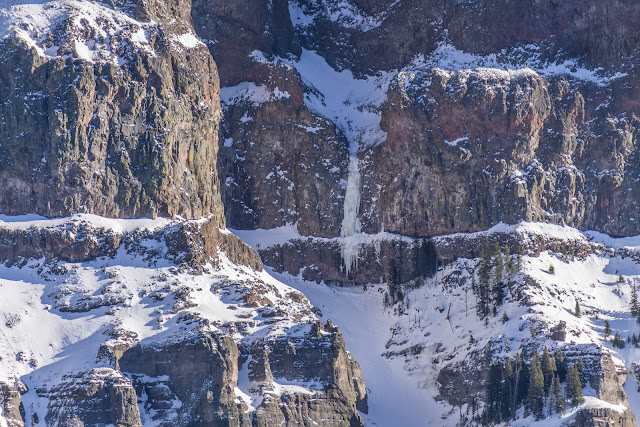 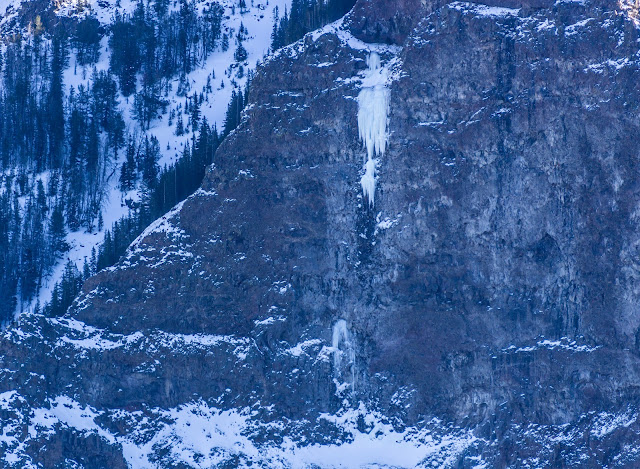 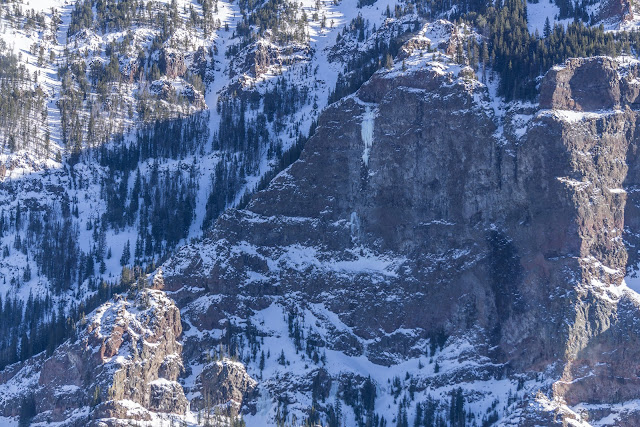 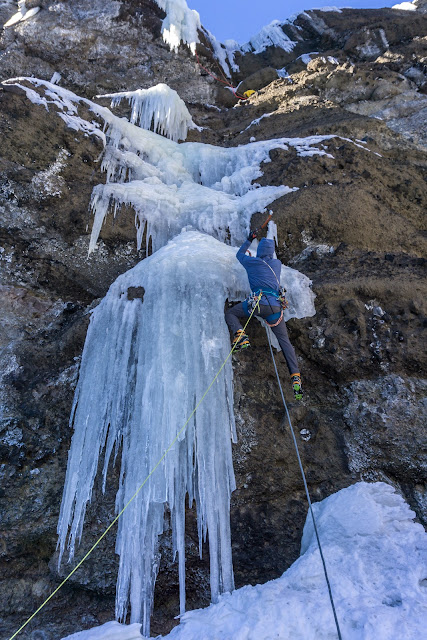 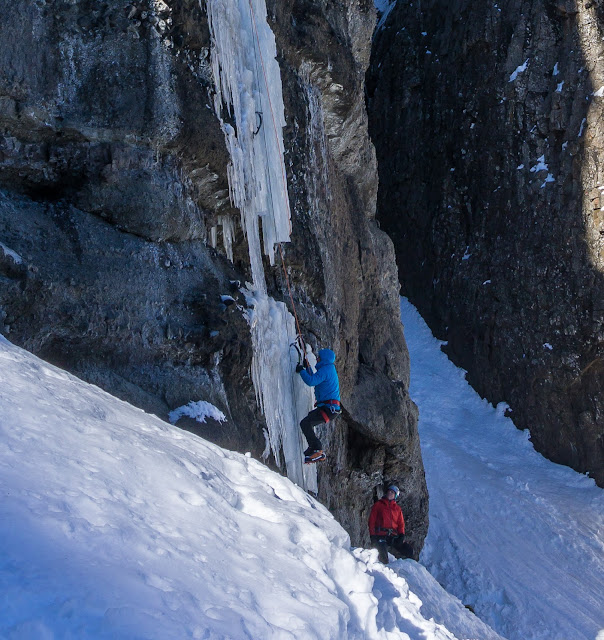 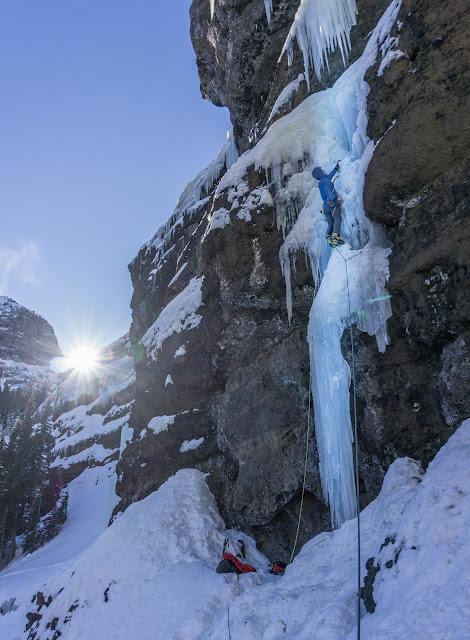 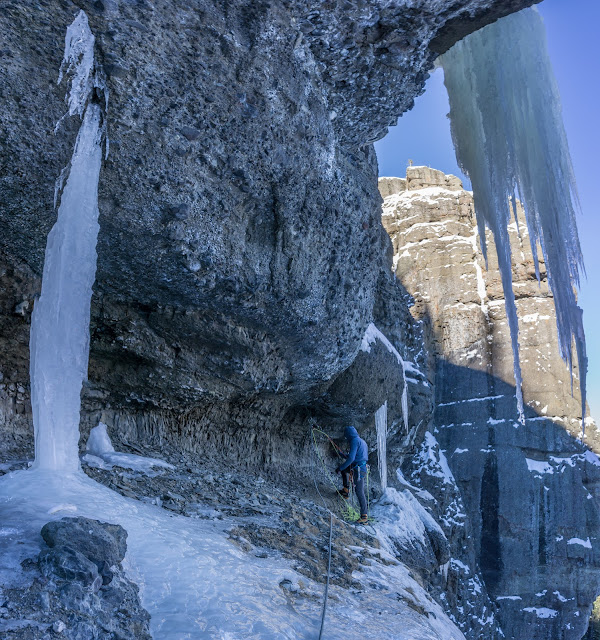 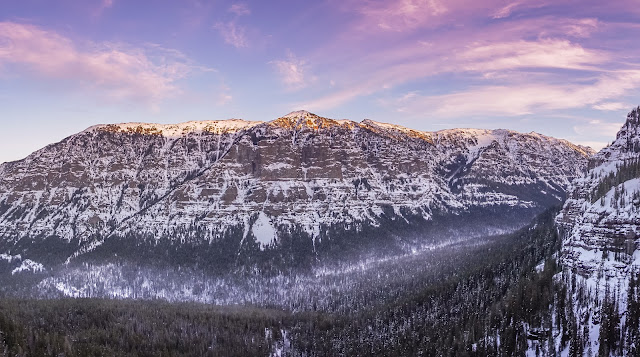 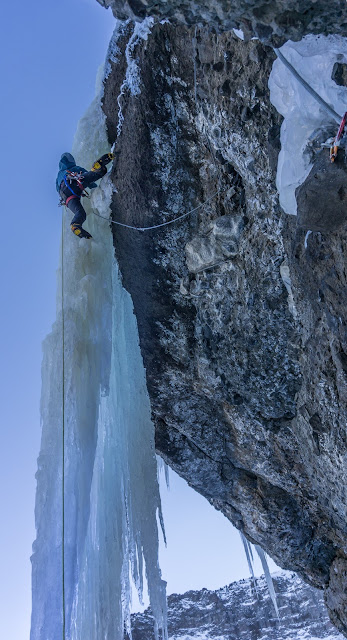 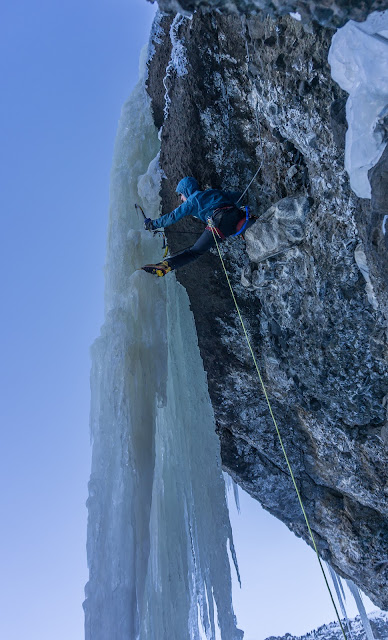 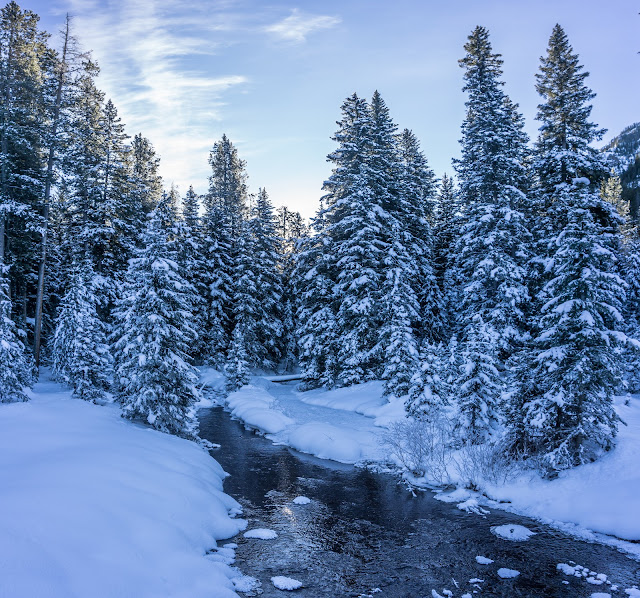 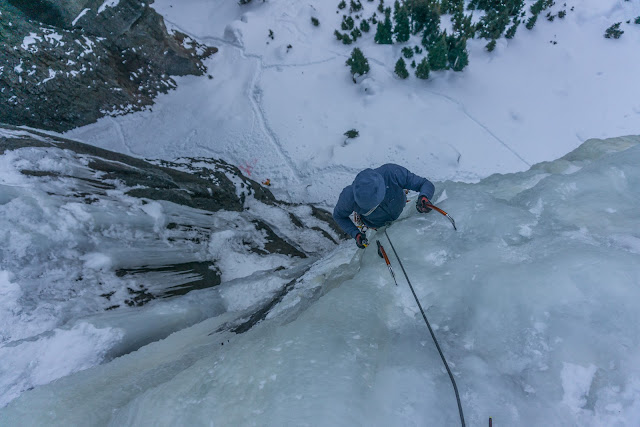 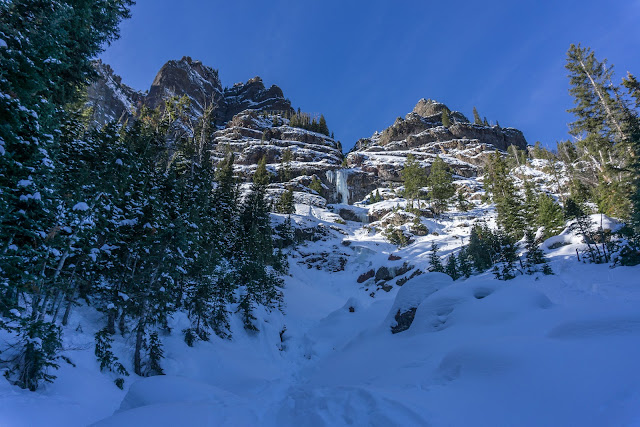 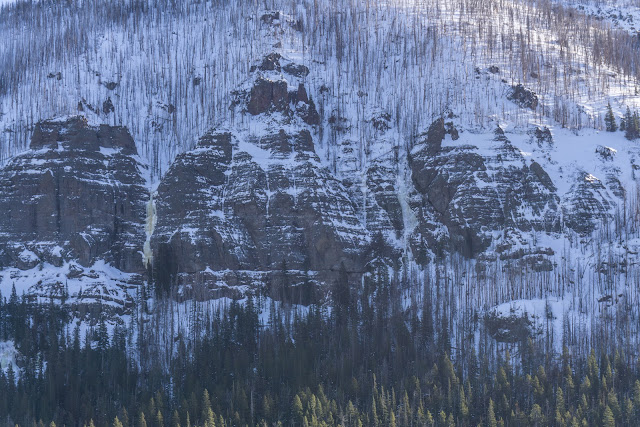 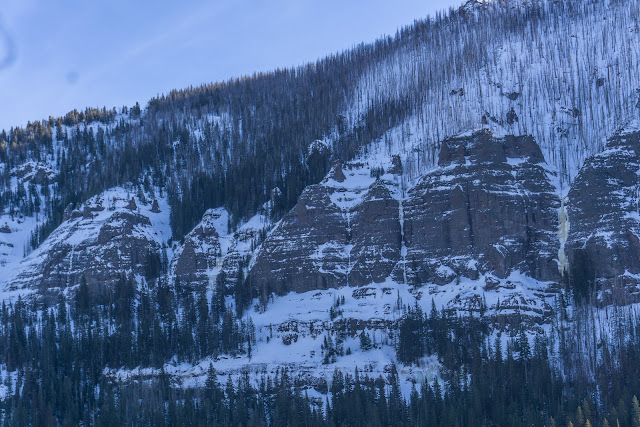 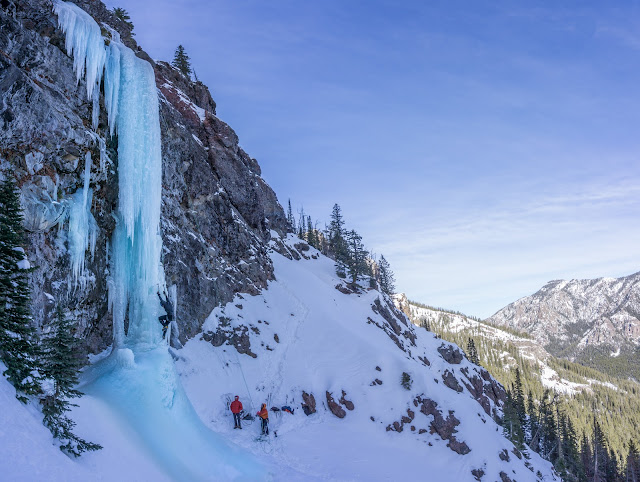 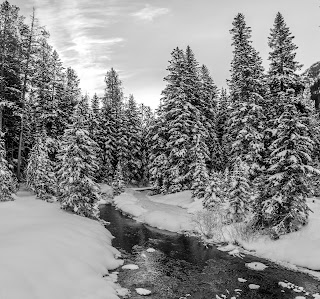 Posted by VividReality at 2:32 PM No comments: