The North Sentinel is a striking wall, yet supposedly unclimbed. Likely due to a much larger Grant Sentinel towering above it. Climbed or not, Brian Prince, Daniel Jeffcoach, Brandon Thau and I established the first known route to ascent it's sheer Northwest Face in early May of 2016. To our luck we took a continuous crack system which was taken from the bottom of the wall to the pyramidical summit pinnacle.

We decided to climb the route as a party of four so that we could get to know Brandon, as it was the first time Daniel, Brian and I climbed with him. We managed to avoid most of the cluster-fucks and climb with some efficiency - the leader would tag a line and bring up the two followers, one of which would belay the new leader and the other would bring up the fourth. #stillclusterfuckedit

Most of the belays were cozy and fun - as fun as watching someone battle a hard offwidth could get. After two approach pitches (5.10 and 5.11) we got to the base of the crack systems we scoped. Brandon climbed a pitch to the base of a beautiful splitter, which turned out to be a flaring crack which transformed into a seam fifty feet up from the belay. I bailed from the base and decided to take the wide system to the right. There, I bailed again. Not comfortable running it out up a thin layback flake, I went into a slightly overhanging offwidth of varied #5 size. With two #5s on our rack, a splitter offwidth seemed appealing. I pushed the cam along as I made slow progress and at some point found a nice calf jam so that I could shake out. To my disappointment, the crack never got big enough to knee-jam, although I lost a good amount of skin trying. The crux was transitioning into the chimney, where I found varied, clean climbing inside. 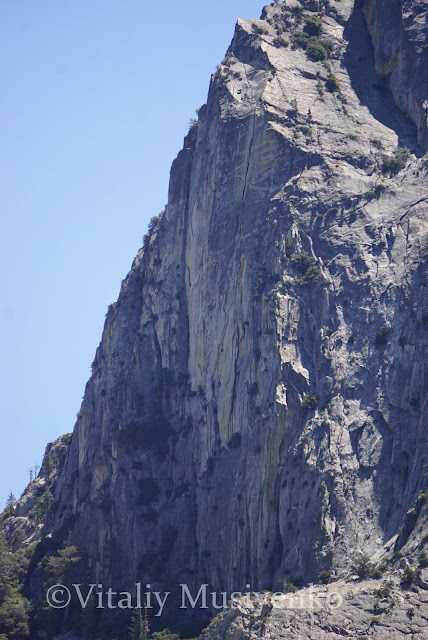 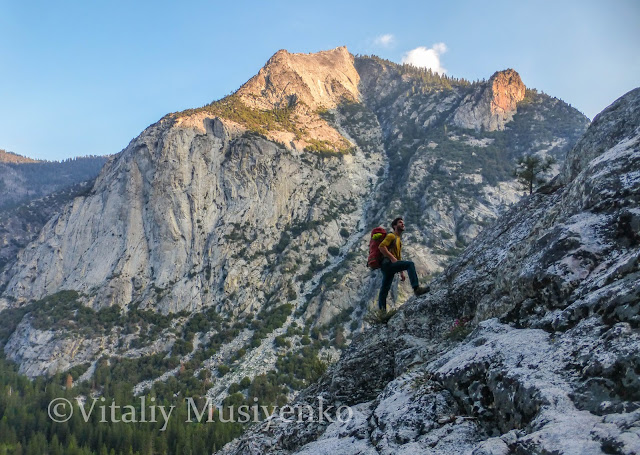 On most long first ascents one ends up bringing more gear than necessary, as the required rack is a mystery. Having an extra piece in possession is usually better than needing to place a bolt or having to tag up the piece from the belay ledge, but having a #6 cam crushing your balls in a squeeze is something I will avoid in the future....

Brian took the next pitch, which had more awesome climbing. Slightly annoying because we had to perform a pendulum in order to connect to a neighboring crack systems, as the one we climbed ended. I was happy to follow this pitch as some of the climbing was fairly damn cruxy and likely much more fun on top rope! :) Same could be said for the following pitch. We had to drill a bolted anchor on the bottom and the top of it and our doubles in #5 and 6 inch cams were not enough to protect this beast! Brandon took the sharp end and I was happy to climb in a team of four, as talking shit from the safety of belay and following on top rope was much better than leding! The crux was a overhanging tipped out #6 size. #burlbrah. I barely got this spot clean while following and thought it was about a 5.11 Odub. 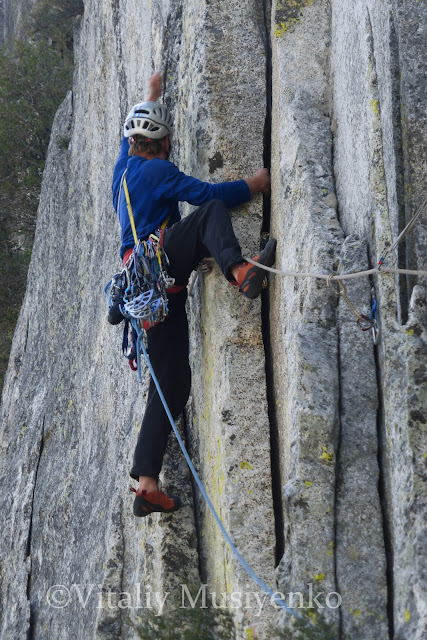 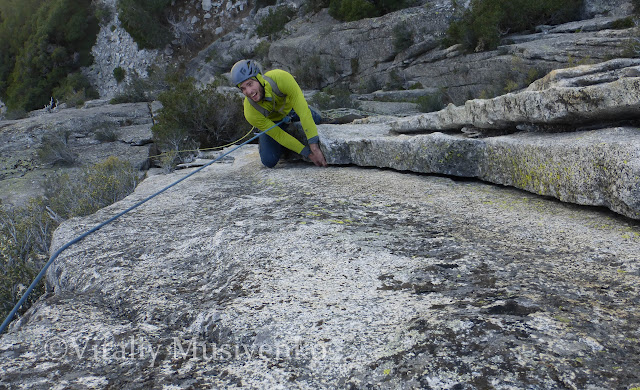 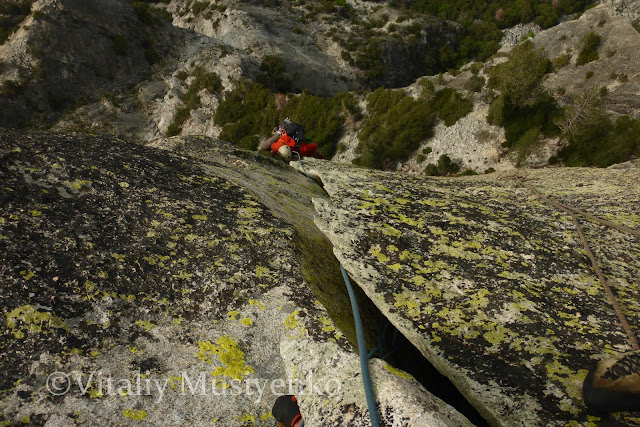 Daniel took the last glory pitch to a spot where we unroped and continued to the top. We were rewarded with incredible views of The Sphynx, North Dome, Charlotte Dome, Bubbs Creek wall, the Grand Sentinel towering above and the rest of the Kings Canyon with the approaching mean-looking clouds. Getting back was a guaranteed adventure of its own, so we wasted little time on top. About thirty minutes of hiking, one two rope rapell and another single rope rap, took us to a section of 4th and low 5th class downclimbing. The parking lot was reached sometime after 10pm. After enjoying a social dinner, I passed the fuck out and woke up sometime around 7am. Daniel and Adam were gonna go up and attempt another route. Knowing how long the previous day took and needing to be at work on Monday, I threw in the white flag and decided I will do a little hike and organize my gear back at the car. Lately I decided to listen to my body more often. When I am tired or don't feel like climbing, I won't. Sending another route does sound better in numbers, but as activity I do out of joy, do I care to do it when it doesn't make me feel good? Not really.

On the way out, I got a few photos of Daniel and Adam climbing mid-way up the wall. A part of me was burning with envy, but my knee and the lower back were burning with pain. Next day, I went to work, following which I had enough PSYCHE to send the gnar at the gym. 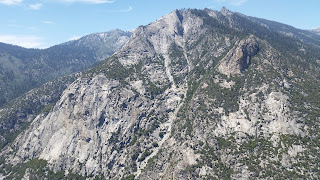 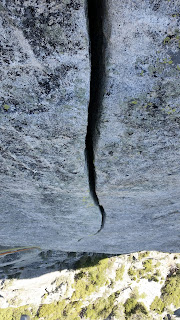 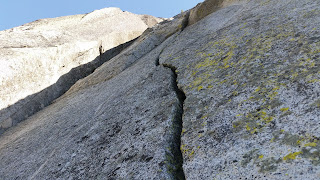 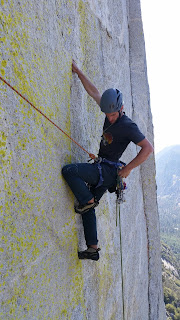 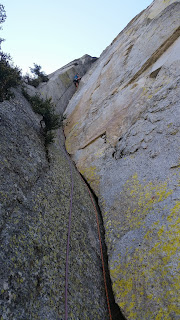 Posted by VividReality at 5:19 PM No comments:

When Brian invited my friend Alaina and I to work on free-climbing Modern Guilt in the end of the winter of 2015, I was blown away by the difficulties. Unable to free ANY of the pitches leading up to the Spice Ledge, my mood was as ominous as the sky. The necessary break on a lofty ledge was interrupted by a few drops of rain, which forced Brian to take off for an attempt at the pitch above. I knew nothing about this pitch, aside from "it is really cool, also kind of hard and exciting," which was all that Brian had to say before launching up. A year later, I came back to rope solo the route in order to work on the pitches and understood what he meant by that statement. Honestly speaking, I was blown away Brian attempted the pitch in the rain! About half way up, we had trouble communicating, as the wind made things tricky. Than all of a sudden I heard clearly "Taaake in slaaack! I am about to whip!!!" I had time to take in a portion of the building slack and lift my eyes to see a body airborne for over thirty feet. It violently slammed into the vertical wall below quicker than I let out an F bomb. Wide-eyed and taken aback I lowered Brian to the safety of the ledge and mumbled, "that was quite a ride...now, how do we get out from here?" Good news was that there is a 5.9 crack option for bailing. Bad news was that by the time we pulled the rope and organized the belay, the rain transformed into a downpour, while I was the one volunteering to lead it. Felt obligated, as to that point, my contributions to the ascent were limited to hangdogging and whining about the holds of all the wrong sizes. Never experienced rock climbing through a waterfall, but it turned out frightening, as expected.  We were able to bail, make it over the summit and even found a business card from a guy who knocked off a giant rock that nearly killed us. My favorite thing about that day was being able to show up to work on Monday.


Needless to say, I had no desire to climb on Moro Rock for a while. Till Daniel, Alaina and I attempted a new route on Panther peak in the Fall of 2015. I predicted the route to be awesome and told Alaina it will likely be a cool FA to be a part of. While jamming in an overhanging fist crack on the 2nd pitch, a foothold broke off, sending me on a ride. Ended up ripping off a chunk of skin and not breaking bones by a miracle. It was a second unexpected fall for me on that pitch alone. I French-freed my way up the last several feet to a ledge and discovered a featureless wall above. Bailed. Same day, we went on to establish a few more new pitches with Daniel and Alaina on the sharp end. The following day, I wasn't up for much adventure climbing. Since Moro rock has a tiny approach, Alaina and I settled for Levity's End (IV 5.10 R) and the South Face (IV 5.8). Both of them were enjoyable and I thought it would be foolish to ignore the short approach. I decided to use the next partner-less weekend to drop the ropes over Modern Guilt.

The climb itself has an interesting history. Unlike majority of the routes on Moro Rock it was put up on rapell, with intentions to become a difficult free climb. Before completing to bolt the route and free climbing the whole thing, the first ascentionist moved away, leaving it as an open project. Brian put in a bunch of time and work into trying to free the line. When I hung my ropes and sampled the climbing on a warm, sunny day, I realized why it has been a fun project for those guys. The climbing was fantastic! Sustained, fun, acrobatic and for me, NAILS HARD. Hanging a lot on most of the pitches, I still had a good time. Rock climbing on cruiser terrain is fun, but for me there is more satisfaction in figuring out how to perform individual moves and working on linking complicated pump-inducing sequences. Some may brush off top rope bouldering as 'lacking adventure' and everyone can have their opinion, but I found this process to be highly rewarding. Unable to see how the hell would the route go free for someone with my skills, I went to rest with intentions to do it again on the following day. Knowing the route a bit helped. But I continued to get owned, which I didn't mind - working on difficult face climbing was the whole point of the outing. The quality of climbing delivered hours of fun and I noticed much improvement. Following the weekend I got in touch with Brian about working on finishing the route. He was happy to have ANY help, as it isn't easy to find partners for working on long difficult climbs. On the next trip we worked on pitches once again, while adding bolts so that the route would be appropriate for climbers trying to onsight - not only for those fortunate enough to top rope the route into submission - making fun of myself here. :) ...In my honest opinion, top roping the route into submission is still damn fun, if one feels like working on hard quality pitches, with a short approach and easy access, this route is a good choice.
Before climbing the route ground up and free, to my luck I was able to find a variation around one of the cruxes. The variation went for me at 5.10+, while Brian sent the original 5.12- slab variation, which was very impressive to watch! To my biggest surprise, I was able to follow the first crux 5.12 clean. Till that day I was only able to free the individual moves, without linking the mega sustained section of the pitch into one. Brian's beta was very helpful and my power endurance definitely improved. Maybe in the future, when I become a better rock climber, I will get back on the route to try leading that pitch myself, but for now I'd like to encourage better climbers to get on it ASAP! The perfect granite, sweet crimps, knobs and chickenhead-covered headwalls are waiting! Eight pitches check in at 5.11+, hard 5.11, 5.10, 5.12, 5.12- or 10+, 5.11-, 5.10+, 5.11-, 5.9 and 5.8, with the route taking an impressive and completely independent line up the West Face of Moro Rock. Even though I have not done the First Ascent and my role on the FFA was minor, I am still very excited to have contributed some!

For those interested in doing the climb: https://www.mountainproject.com/v/modern-guilt/111750252
Posted by VividReality at 5:40 PM No comments: