Tokopah Valley is a magical place. Unlike many of the other destinations around the state, I fell in love with it from the first sight. My first outing to this Valley did not involve rock climbing, it was the rarely done ice climb named Moonage Daydream that landed my friends and I on top of the Watchtower in the Winter of 2013. Even though the hike to the base did not take much longer than an hour, we felt as if we climbed an ice route on a remote granite spire.  Maybe we were in Karakoram, or possibly Tien-Shan? As we scratched our way up an 800 mixed route we did not see any other people all day. It was us and the view of granite formations that teased us from across the Valley. Back than I had no idea what they were named, if they had any routes on them, who stood on top of their summits, but I really wanted to climb them all. Suspended in a semi-hanging belay off of a few ice screws I gazed toward the domes and imagined perfect lines that could go up their flawless walls. I wondered if the giant roof in the middle of the lower dome is passable and how incredible it must be to camp in a spot with views of Alta Peak, Tokopah Falls and the Watchtower. 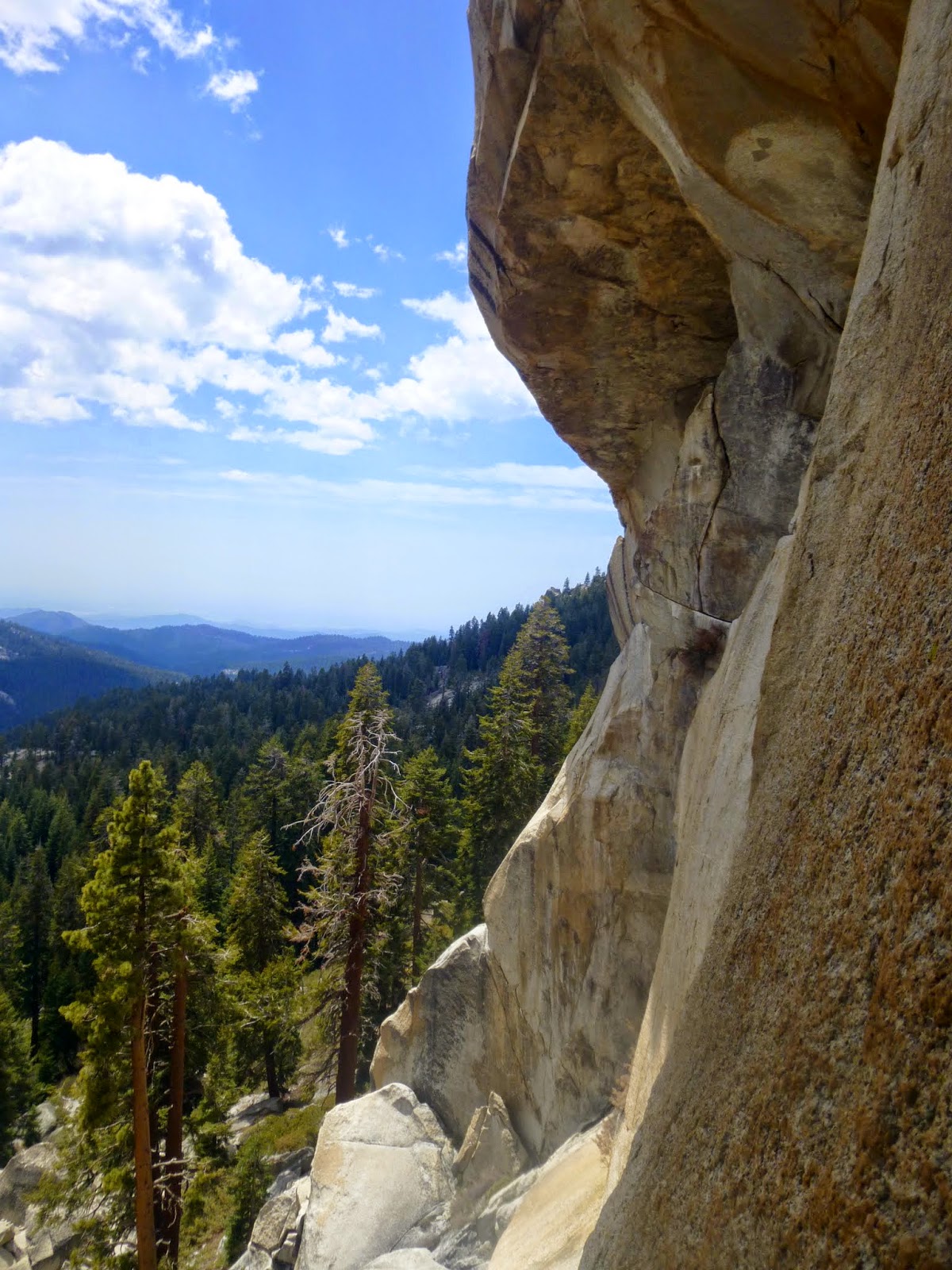 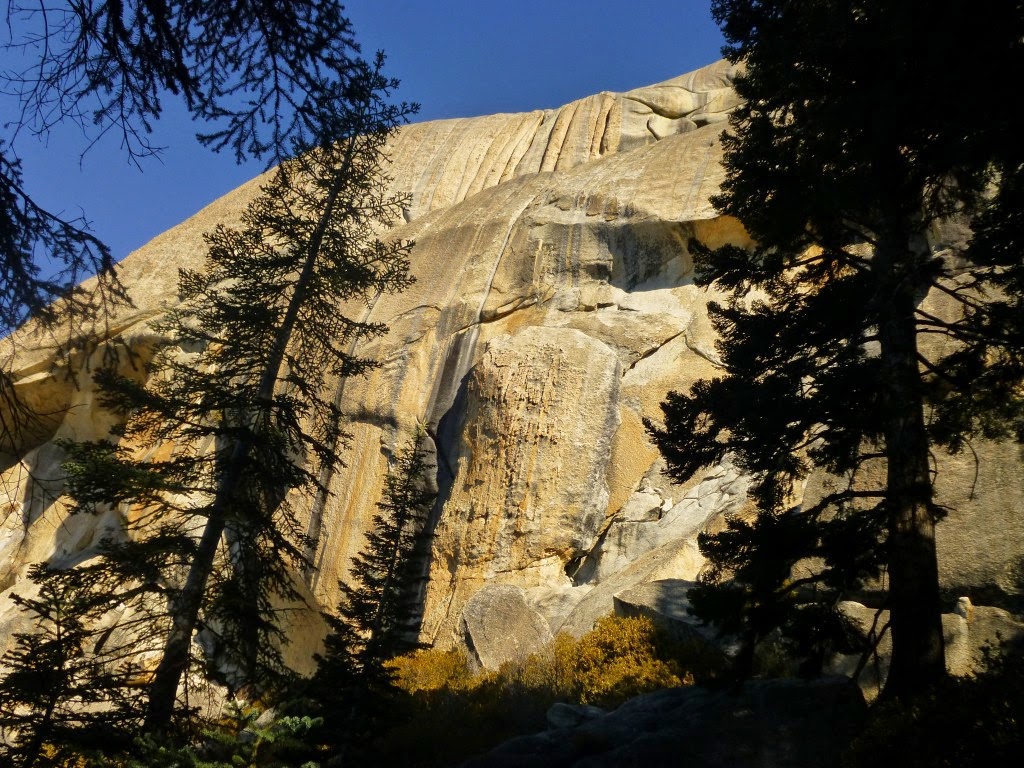 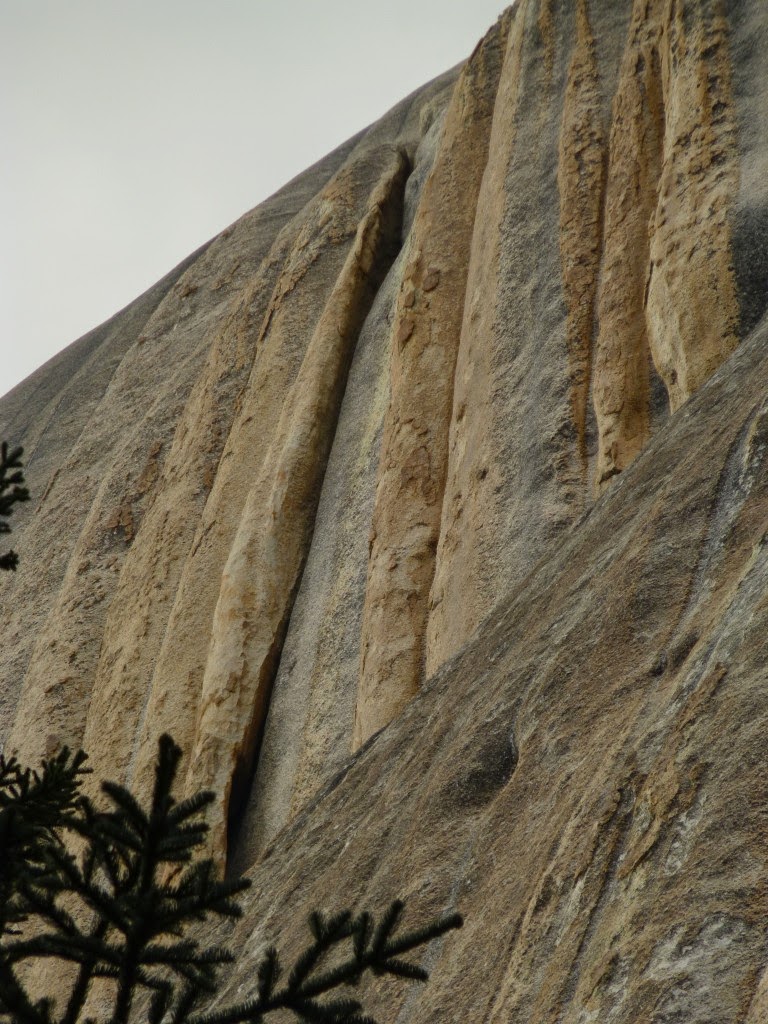 On a prior trip we noticed a short chimney system which led to a ledge part way up the face. After climbing it we noticed an older bolt and got a little sad because it meant someone have gone this way. Above it however we found a beautiful face pitch with difficulties to 5.10 and no sign of previous passage (no bolts). We realized that the older bolt was used to bail off the ledge and proceeded up with more excitement. Bolting the face pitch and getting to a giant ledge, we labeled The Balcony, took remainder of the day. I started up the giant offwidth and was annoyed by a thin section leading into it. Thin crack below had a lot of dirt that I had to clean in order to make it usable. I tried to lead it, but could not free the moves even after trying to top rope it from my high piece. After we bailed down and got back to camp I was a little bummed. Not only did we have to pull up on the old bolt to get to the face section above, I had to aid several moves before I got into the offwidth. The crux of the face pitch didn't feel too easy and still had to be led clean. We only had one more day to finish the route and hike out in order to return to work by Monday. We ate, went to sleep and all I could do was to pray for good luck. It worked fairly well. I was able to sent the face pitch AND the thin moves getting into the offwidth. Even the longish runouts in the offwidth went without an accident. I back cleaned my large cams through the climb and was happy to have them to built a belay station. Daniel took a short but awesome handcrack to a final section of slab where we placed our last bolt. Both of us were super excited about climbing this route because it offered great climbing and pushed us while we led into the unknown.

During the rest day Luke and I started contemplating bigger things. Even though I am lousy (relatively speaking) at face climbing, success on Black Velvet Peak allowed me to gain enough confidence to consider the Original Route on Rainbow Wall as a possibility. Another climb I wanted to attempt was the Cloud Tower. Both of these, to me, seemed like a big personal challenge as is. Luke’s idea about climbing these routes was a little different, “LET’S LINK’EM UP!” I tried to propose an easier link up, “maybe we do Cloud Tower and Crimson Crysallis?” “Yea, we can do Crimson Crysallis, on the way back after we link up the Cloud Tower to Rainbow Wall,” said Luke. His energy was contagious and I got excited about the link up myself.
We had an alpine start and got to the scenic loop entrance several minutes before 6am. Made good time on the hike in and I linked the first two pitches of 5.8 to make things go a little faster. Luke took the awesome 5.10 splitter and we were below the crux of the route – a 5.11d corner. Since Luke has sent this pitch before, I tried to get the OS and led it. I ended up taking two falls and my ego quickly approved the 5.12a rating that is listed in some sources. Common sense opposed it, “you are not a 5.12 climber, so why are you surprised?” Before these two settled, Luke got up to the belay station and set off for the next lead. He linked the amazing fist crack with a fun chimney tunnel through and managed to booty another cam. For those who are not familiar with Luke, it is very unlikely that he does NOT booty something on every other climb he does. Not sure if calling him a booty machine is appropriate, but he does well collecting booty. *His wife is a rock climber too and knows what I mean when I say booty. I am not being a bad wingman here!  By the way, closest thing we had to a party while climbing at Vegas was a late night trip to Five Guys and Yogurtland after climbing the Warrior! Luke is a terrible wing-man, not me!!!*
Anyway, we were talking about climbing the Cloud Tower. I was at the base of the 5.11c corner and it was another big lead of mine. Since I fell on the other crux pitch, I was really relaxed about this lead, and sent the pitch without breaking much sweat. Actually didn’t seem harder than the Fox or Our Father, both of which are 5.10ds. At times trad ratings confuse me so much that I wish “if it was super hard but you free climbed it - give it a 5.9+” system was still in effect. After hauling our mini bag to the anchor I continued up and linked the pitch to the next 5.12+ pitch - in my case A0 bolt ladder with some 5.10 free climbing mixed in. Upper section was really loose, and I was glad I had a green alien to pull on. Next up was a tough 5.9 offwidth which was Luke’s lead, thank god. We simul climbed the 4th class terrain above and I almost pulled a giant block while leading the final chimney of the climb. Even though this pitch was fun, I wish more people climbed it on regular basis so it could clean up. It was about 1pm (?) and we were already done with the Cloud Tower Direct. Seemed like we had a chance for the link up!

Here is where the story got a bit more entertaining. We followed a major trail down and at one point thought it can’t be the right one. “It is too good! Must be hikers’ trail that leads down. We need to get across to Rainbow!” We found a loose, wet and scary gulley that led us to some ledges above. Terrain here became a bit more real. And we soloed 5th class ledges and something that I would call a 5.8 OW. In a way, this seemed like a way for bad-ass climbers that would link up Cloud Tower to Rainbow Wall. After we got to the top of the formation, that we spent the last hour climbing we realized how screwed we were. About a thousand feet above where we wanted to be. We tried to rappel, but did not have enough trees to continue. At some point we decided to climb up the headwall we just rappel using the top rope set up we had going. It was probably a First Ascent of a 30M 5.7+ pitch which we will make sure to submit in the AAJ….NOT. In any case, we rappelled and reversed our adventure back to the “hikers trail.” It led us down and we ended up 300 or so feet below the Rainbow Wall. It was after 4pm and we did not feel bad-ass enough to climb the Rainbow Wall in under three hours, so we bailed on the idea and went back down to our car. Even though we didn’t complete our planned link-up the alternative was a kick-ass day nonetheless!
As a benefit from not being very tired on the following day, we decided to do some cragging in Black Velvet. We got on a few awesome routes including Delicate Sound of Thunder (2p 11b), Our Father (3 p 10d) and Tales from the Gripped (3p 11b). The climbing on all three was pretty challenging and fun. Our finger tips got trashed after three days of climbing and we decided that on the following day we will let them heal by climbing The Warrior!
Posted by VividReality at 9:30 AM No comments: