The giant West Face of the Hamilton Dome turned out to be a home to fantastic rock, limitless possibilities and the best moderate route I have climbed in the High Sierra! It is almost as wide as it is tall - about 1,700-1,800 feet of climbing from the base to the summit. First, I noticed the giant slab from the approach to Hamilton Lake. The North Ridge and the West Face had routes, but I didn't know of any established climbs going up the South Face, which looked as big and impressive as the North. Several weeks later, Brian and I got a closer look, while climbing a new route on Eagle Scout Creek Dome. "The face is BIG, the rock looks good!"....next week we set up a camp in Eagle Scout Creek and found the rock to be even better than we imagined! :) 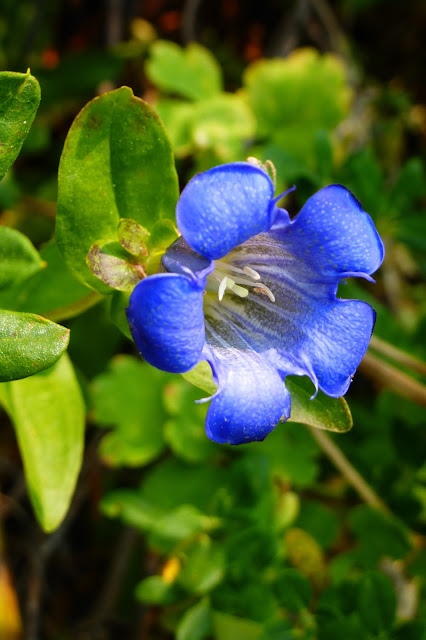 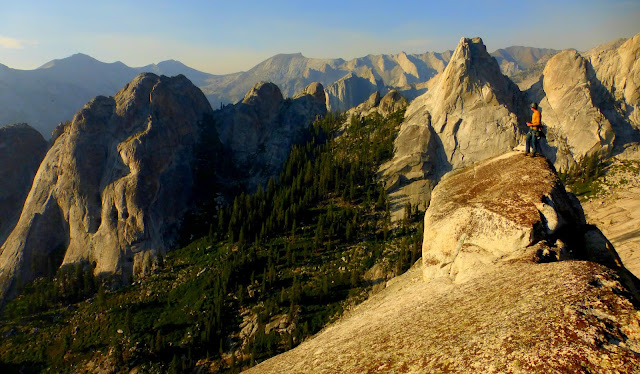 On the first day of climbing we started up a clean left facing dihedral that led to mostly moderate face climbing with a few cracks here and there. Two thirds up the formation we discussed the options above while having lunch on a giant balcony where a battalion could comfortably bivy. We settled for a chicken-head covered near-vertical fin to take us to the top. Plenty of other ways seemed less challenging, but the fin looked like the wildest option. It was very steep and tall - about 400 feet! Slinging the knobs and chicken heads allowed the leader to find adequate protection on otherwise crack-less monolith. We ran the rope out for 60 meters and simul climbed at times. Third pitch from the ledge, featured a wild jump across to gain the upper Hamilton Dome proper and exposed section of easy 5th to 4th class led us to the summit ridge. We thought we were lucky to find a route with such awesome climbing. I thought it was no worse than the mega classic South Face of the Charlotte Dome. To my surprise, the next day produced a route that was even better!


We picked a line that was steeper and more intimidating than the day prior. Even though we scoped a cool splitter at the base, it seemed like the only apparent crack in sight. Couple hundred feet above it was the first of the two major roofs that looked troublesome. After the long first pitch, we were psyched to find a hidden crack that led to the first of roofs. Prepared to aid climb it, it was awesome to pull over the first roof at easy 5.10. The cracks were hidden from the base, but turned out the route had plenty. Even though we brought a #4 and a 5 camalot, there was no need to carry gear larger than a #3!
As we gained elevation, our smiles grew bigger and we were blown away by the awesomeness of this climb. Three more pitches of fun cracks took us to the second roof, which was passed on monkey-bar-like jugs. Face climbing above required placement of a few bolts to keep the climbing adequately protected. Past the second bolt we traversed left to a belay station. After the traverse, the face features grow till they transform into large jugs that could easily be slung for protection. More chicken heads, two dihedrals, a bit of slab and several more cracks took us to the top of the difficulties. We climbed the route in seven LONG (full 60 meter pitches, with simul-climbing at times) pitches. Four more hundred feet of 3-5th class scrambling with an amazing view of the West Face took us to the top one more time. The summit panorama is one of the best in the whole range - Castle Rocks to the West, Eagle Scout Peak, Kaweahs and the Hamilton Spires to the East. All the rock spires (which had one or two ascents EVER) of Granite Creek to the South. The Angel Wings, Prism, Cherubim Dome, Mt. Stewart, the Globe and the Saber Ridge are seen to the North. A stunning summit with plenty of space to relax. 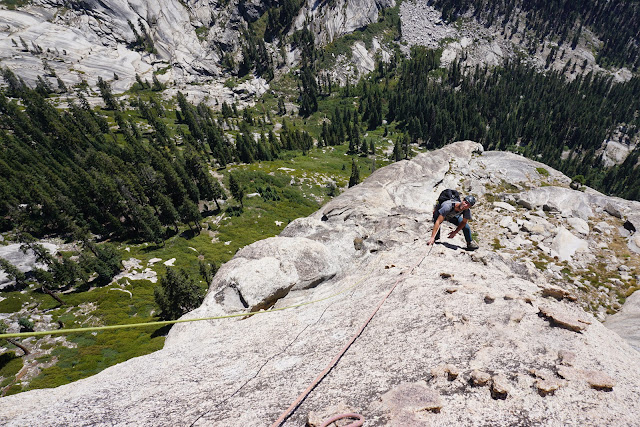 To descent, scramble east towards the notch. A short 4th class down-climb will take you to the first rap station - webbing around a horn. Three more rappells will take you to the notch. One sixty meter rope works well and the anchors are bomber. Even though at this point you may be really excited about the climb, or dreading the hike back, make sure to watch your ends and not get destructed till you are safe at the base!
The lengthy approach without a trail to the base of the formation is a blessing in disguise. For those who plan to venture out and repeat either of these climbs a true adventure is in store. There is no "best" way to get there, but plenty of options. A map and backcountry navigation skills are preferred. :) The camping in the upper Eagle Scout Creek is spectacular and there is plenty of rock around to find own new routes, scenic photo-ops and fishing would be incredible! Personally, I can't wait to go back there!

Largest of the Hamilton Towers, I suspect it was the one described as the most difficult and climbed by Greg Henzie, Chris Jones and Galen Rowell in 1970 (R.J. Secor's High Sierra: Peaks, Passes and Trails). Although the North Face of the formation looks challenging from the High Sierra Trail, the view of the striking South Face surrounded by impressive spires forced me to demand a week long vacation as soon as I was back to work. It allowed Brian Prince and I to return five days after the initial sighting from the Eagle Scout Creek Dome. Other than the original route from the North, prior to our ascent the peak had no other routes we were aware of and no specific name. While enjoying the stunning views from the summit after climbing the peak, we decided to think of a fitting name for such a proud peak. To honor one of the first ascentionists, we named it The Rowell Tower. In memory of a renowned climber, photographer and writer, who made the adventure accessible to the masses through numerous stories and photographs. His spirit is well alive here in the Sierra Nevada, where dozens of worthy un-climbed faces and untraveled canyons allow a life-time of exploration. 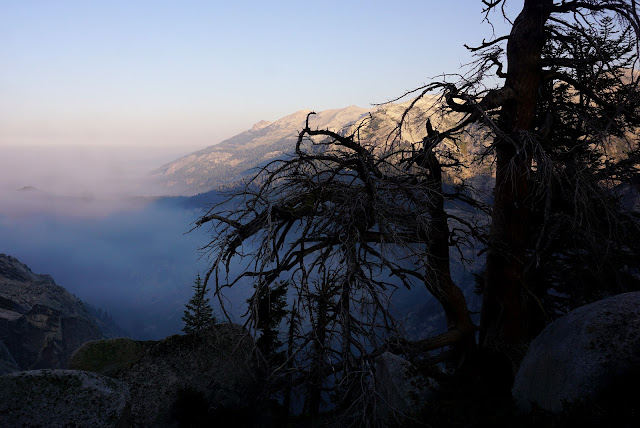 During the prior outing, we found heinous bushwhacking approaching the neighboring spires through the Granite Creek drainage, so we decided to set a basecamp at Hamilton Lake, which would allow us to attempt several peaks in the surrounding area. Without assistance from pack mules, we hiked in nine days of food and climbed a new route on the Cherubim Dome day following the 16 (or 17) mile approach. On the third day we crossed over the ridge that drops down from the Eagle Scout Peak and forms some of the Hamilton Towers. We gained about two thousand feet and crossed the ridge at the notch east of the spire we dubbed The Serpent's Tooth. We brought four days of food and set up camp next to a stream, only fifteen minutes west of a beautiful lake. As striking as this tower looked from across, the route we found was not something I would recommend to a friend. There may be better options up the central part of the South Face, but we didn't see continuous crack systems. The eastern part of the South Face looked too straight forward to be challenging to us, but may be a great adventure for someone who wants to do a moderate new route on a gorgeous rock monolith.
We begun by climbing un-roped up a pitch that did not look too bad from the base. It turned out to have a 5.8ish crux, which was plenty challenging in hiking boots, with a heavy load of gear and a death fall potential far away from any sort of help. If there is anyone who want to do a second ascent of this route, I would advise to rope up at the base, put on your climbing shoes, or better climb one of the other routes we have done in the area. From the top of the initial pitch, we took the left leaning weakness on the west side of the south face. Three more long, at times dirty, difficult and plenty runout pitches took us to a large ledge on the western flanks. By than, we were fairly worked by the approach from Hamilton Lake and the burly climbing we encountered. The continuous steep crack systems above had a vertical section that would likely involve a bolt ladder, so we discussed bailing. After a 30 meter rappell, we traversed further left, where we found a system that allowed us to continue bailing upwards. We climbed another five pitches (actually four, but we simul-climbed for about 400 feet), which were not much less scary or loose than the initial pitches. The final pitch involved negotiating around stacked flakes that could have killed Brian if I looked at them too hard. Fortunately they remained fixed to the mountain for a little longer and bombarded down as Brian applied pressure from a safe stance. It was a great show, but nothing new, as we had at least four of those by than.

Posted by VividReality at 10:16 PM No comments: