Hamik and I finally had an outing where we could relax a little. We packed a bunch of cookies and headed off to Paron Valley to climb La Esfinge (5,325 M or 17,470 ft). La Esfinge (or The Sphinx) is the most famous big wall in Peru. Since we did not have a porta-ledge, or much desire to sleep on the wall we picked "Original" route as our climb of choice. It features over 2000 ft of technical climbing with a crux of 5.11c-.
The crux of the climb turned out to be the approach. Not only did we get owned by a taxi service, we also got lost on the hike to the base of the wall. We enjoyed a small victory on a collectivo when we avoided paying double for having giant backpacks - we were able to stuff them under back seats. But when we got to Caraz we failed to find other gringos who wanted to carpool to Laguna Paron. We had to take a private taxi for 100 soles one way. Even though it is only 35$ for an hour and a half of driving, by now we are used to paying 1/10th of that. Fail number two came when we got to the trail-head proper; since the trail we had to take was descending, we disregarded it, and cut up the fist rock gully we noticed. After ascending about 2,500 ft we stumbled up on a hill and saw the figure of La Esfinge sticking out a LONG ways to the west. On most days we would laugh it off and traverse over, but it was getting late, was starting to snow, and we had to climb over a fairly serious-looking ridge with our heavy pack on. When we got to the base of the ridge, our assessment turned out to be correct - it was pretty serious. On a sunny day it might of been a cool scramble in approach shoes, but now we had to solo terrain to 5.7 wearing beat up running shoes, heavy packs, in a snow storm. Somehow we made it over the ridge, got rid of screaming barfies, and arrived to intended campsite in one piece. We made hot chocolate, and crashed for the night.
To our luck it did not snow for too long, and completely cleared through the night. We woke up at sunrise to beautiful glow over Chacraraju Oeste. From here Brad Johnson's book describes the approach as "an hour of blood, sweat, and tears," but we were able to find a nice trail and make it to the base of the wall in good time. To our surprise there were two parties intending to climb La Esfinge. One party from Peru was jugging up their fixed lines when we arrived. I was polite as a fox and did my best to assure them we are not going to get in their way. It was the right thing to do - by the time their first climber jugged to top of pitch two, Hamik was leading the third. 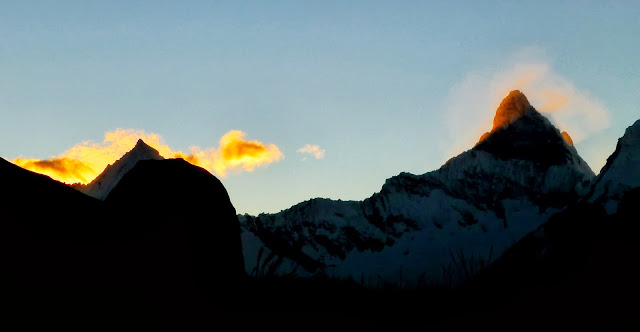 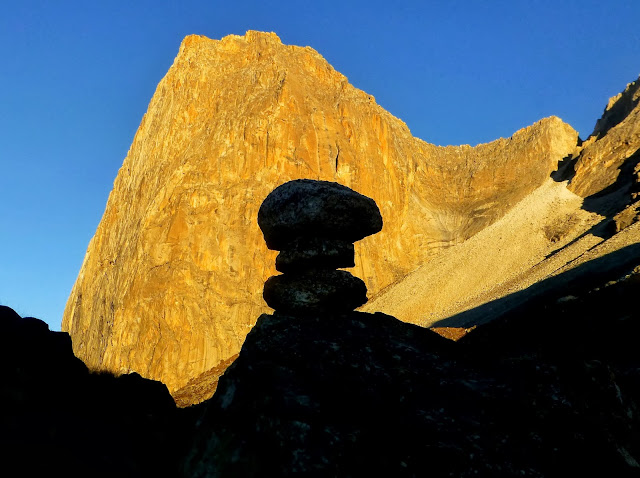 Our plan was to treat this route as any free climb, and we alternated leads at every belay. As I look back to our strategy, I think it would be easier to lead in blocks, since usually we did not place much gear on any single pitch. Even though this climb was not very sustained or difficult, it offered climbing of highest quality in a setting that I could describe as unreal. With each climbed pitch we were rising higher over surrounding glaciers. Views of 6,000 M peaks all around were fantastic. I was happy to see the other side of Chacraraju Oeste, which looks terrifyingly beautiful. Views of Huandoys, Caraz I, and Piramide were also stunning. Almost every pitch had an original and cool crux with easier climbing surrounding it. Some of the pitches had very slippery sections, even more slippery than climbing on domes of Toulumne. Many pitches of this climb were memorable. Especially traverse on pitch four (maybe I was a bit off route there - it was spicy getting over to the overhang). Crux sixth pitch (awesome under-cling into a hand crack, followed by amazing finger crack) was amazing, but I blew the move after getting through the crux itself. On 2nd attempt I moved through the moves with no trouble and freed the pitch with no trouble. Hamik led the second crux 5.11 overhang (pitch 7), which was super fun and exciting, so was the wide section on pitch 8 - slippery lie-back protected with old rusty rivets. 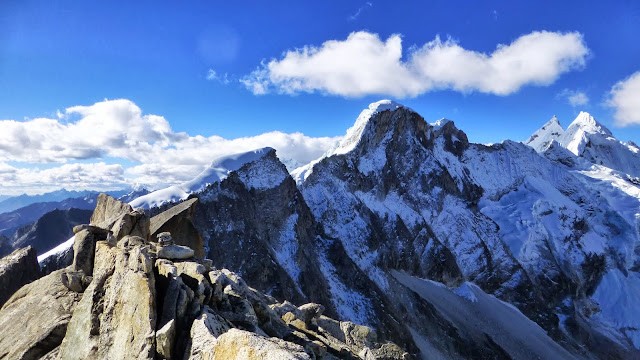 When we got to the giant bivy ledge (top of pitch 9) the wind picked up and east face was getting ready to go into shade. We picked up our speed - Hamik linked pitch 10 (5.10 corner - awesome!) with pitch 11, a 5.7 R groove. I linked "5.10 poor pro" to 5.9 R (pitches 12 and 13) - which was easier than 5.9, but had no protection at all! From there we tried to pick our way up through the upper section without much help from our topo. It seemed like the upper part of the wall would never end, and we would never re-warm our hands. At elevation of over 17,000 ft temperature drops are really noticeable when the sun drops over the shoulder. Wind chill makes it even worse. But after about 17 pitches of climbing the climb did end with an awesome finger crack in a corner and a casual walk to the summit. We took some photos on top, tried to digest the views of this unreal place, had a snack and headed down. Our single 70 M rope got us down to the base without much trouble and we made it down to the trail to see my favorite show - the sunset! Since we took only 8 hours to climb the route we never had to put on our head-lamps. Perfect day on good rock - good change from our previous alpine climb! :)
Posted by VividReality at 7:42 PM 2 comments:

Chacraraju Este (6,001 M / 19,688 ft), like Alpamayo, is a striking peak in Cordillera Blanca. But unlike Alpamayo it is a peak which sees only few attempts per year, if any, most of which end up being just that - attempts. The Research I did before our trip showed not much reason to be optimistic. The first report I found about an attempt at 'Jaeger route' (our route of choice) was named "Paralysed in Peru - Accident on Chacraraju." Second, was a youtube video from a sponsored German team, at the end of which the climbers complained about terrible conditions of corniced summit ridge. Third article I found, was from a well-known British pro-climber Nick Bullock. In 20 hours, tent to tent he and his partner established a new 'three-pitch direct variation' to Jaeger route but stated, "The summit was not climbed to, as life appeared more favorable." A few days after our adventure on Chacraraju Este I am sure our life appeared much more favorable than getting to the the peak, but being too stubborn deserves the credit for not calling it quits.  The last 200 vertical feet took us close to four hours - we burrowed through sugar snow, fought hollow ice, attempted to aid a summit cornice with pickets, and used every possible trick we could think of before we reached the top in a complete white-out. This time the views were slim to none, but excitement, oh no, the FEAR was high - we still had to rapell from the unconsolidated and overhanging summit cornice, off of a single picket, create a dozen or so v-threads to abseil back down to a glacier in a white-out, and find our way down to our camp 2000 ft below - hiking through flurries of snow on unstable talus.
Every journey begins with some rest. Our post Quitaraju/Alpamayo rest was in Hatun Machay. We spent four days clipping bolts and "crushing gnar with our bros." By modern sport climbing standarts not "crushing" at all, but I was excited to onsight or red-point six 5.11As in first two days, which for me is good news. Mountain diet made up of Oreos must be working well, no matter how many I eat, my waist line shrinks. I was most excited about onsighting two of the area's 3/3 star 5.11As - "Welcome to Huaraz," and "Fancy a Good Route." The final sequence of the latter was one of the coolest finishes to any climb I have ever done - technical but at the same time powerful. Even Hamik was impressed with the finish and happy to get the onsight of this route. In addition to climbing rock, again, I hiked up a 4,800 M peak a few times to help my body acclimate. After the first couple of days my skin got worked and I was happy to do easier routes and some pull-ups back at the guest house. Quite funny, but our first mini epic of our trip happened on the way back from Hatun Machay - we barely escaped a shiver bivy and got picked up by a 'collectivo' (fun way to travel around) thirty minutes before sunset. This time we waited for a ride for close to two hours. Leave the hut earlier than 3pm, lesson learned!
When we got back to Huaraz, bought supplies for our alpine outing, and arranged our transportation, most of the local people were surprised to hear we were going to attempt Chacraraju - "No one climbs that peak, it is hard!" The worker at an entrance station to Huascaran National Park even tried to talk us out of attempting it! Cherry on top was a British guy we met at Laguna 69 - "Two climbers tried to climb it, but both died." My eyes bulged out in disbelief, but out of courtesy I kept my mouth shut. Some people are great (not really) at being supportive. 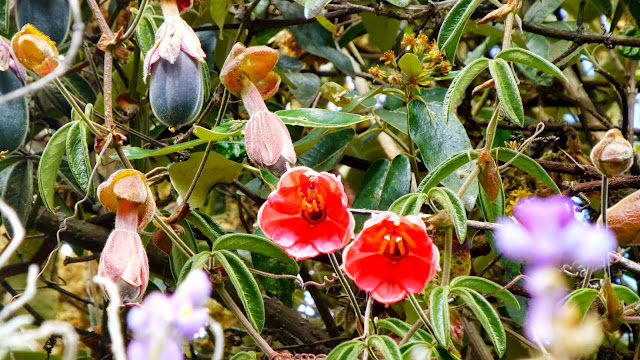 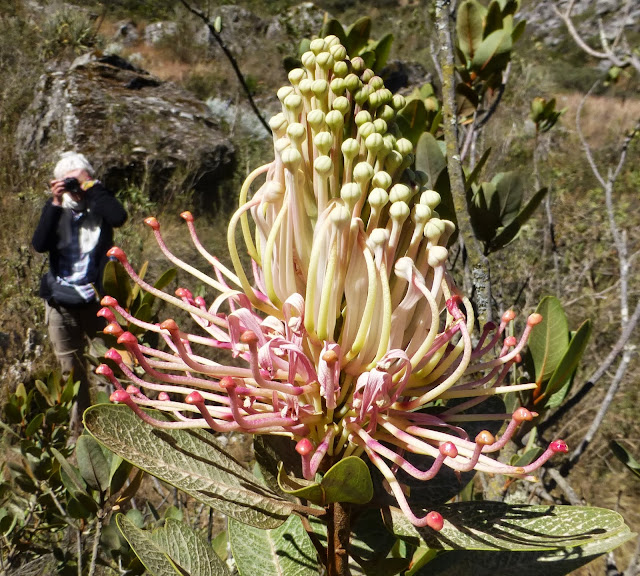 On our way back to Huaraz we met many other people, including a group of Austrian tourists who offered us a ride to Yungay. Making it back to our hotel before sunset was a treat, this time we were able to get out and celebrate our climb with a good meal (two meals and two cones of ice cream in my case). Relaxing in Huaraz is great, but there is more rock climbing to be done. 'The Sphynx' is calling! I'm psyched to make it out to Paron Valley.

Posted by VividReality at 2:31 PM 7 comments: