Even though the desire to return home was approaching its high-point, Hamik and I wanted to do a few more "big" climbs in Peru. With less than ten days remaining we decided to pick objectives that would allow us to explore a few more valleys and tick off a couple of 'creme of the crop' objectives. Aside from trying anticuchos (beef hearts), and chocolate cake from California Cafe (almost always sold out), we picked two more climbs - Karma De Los Condores (5.11+) and Huascaran Sur.
After 'Karma De Los Condores' was climbed it received a lot of press in Alpinist and Climbing magazine. It was labeled as "Astroman of Peru." Neither of us climbed The Astroman, but it seemed logical to flail on a less crowded variation. Aside from that this climb seemed super fun in the photos we looked at prior to our vacation! We packed our gear and took a taxi to Pashpa (60 soles one way). Pashpa is a small town from which Ischinca Valley is approached. Due to rain we half-jogged the six mile approach and made it to camp in under two hours. The weather been unstable for most of our trip, and it has been raining for several days in a row, even in Huaraz. We were very skeptical about climbing the route on the following day, but by seven PM the rain stopped. We woke up after dawn and bush-whacked our way up to the base of the climb.

Fifth pitch started with a hard-looking finger crack going up to a roof. Secretly hoping Hamik would want to take this pitch I looked at him, but heard "Have fun motherfucker!" I racked up and clipped a first piece of fixed protection - a stuck micro-cam - someone most likely took a fall on. Climbing was sustained, but never too difficult. After looking carefully I found some foot holds to supplement the crack. Even though I expected to take a bunch of falls I managed to onsight this pitch. After following Hamik congratulated me on 'fine' job and looked ahead. Roofs above us looked menacing, almost impossible. However, after he started up the pitch he made progress. First roof was difficult, but doable. It was the finger-crack before the second roof that gave us the most trouble. Neither of us managed to onsight this pitch, but both had a great work-out. The most exciting ingredient of this pitch was not the climbing, but the exposure! To rappell back down from top of this pitch you actually have to fix a rope to previous anchor and pull yourself in some 30 ft. Since weather was turning and we were literary freezing we rappelled after first six pitches. Not sure if Astroman of Yosemite is as hard, but it will certainly not be as intimidating!

Another climb on our 'must do' list was Huascaran Sur - at 6,768 meters it is the tallest mountain in Peru. Since we have been eating too much chocolate cake and drinking too much Inka Cola we decided to make this climb more challenging than it is. From town of Musho one has to do approximately 12,500-13,000 ft of vertical elevation gain to get to the 22,205 ft summit. We decided to approach the refugio on day one (about 5,500 ft of elevation gain), and summit from refugio on the second day (gaining and losing another 7,000-7,500 ft in the process). At first we planned to climb it via the Shield (a 3000 ft ice wall that ranges from 45 to 60 degrees), but since we were not camping higher on the mountain we realized it would be hard to find the approach to this route through a broken glacier in the dark. In addition, it has snowed a lot in the last several days and we thought our chances to avoid breaking trail were higher on normal route.
To our disappointment we reached the col camp after sunrise, and found about a dozen other climbers standing around waiting for us to go ahead. For next 3000 ft Hamik and I took turns breaking trail through fresh snow. Even though it wasn't too deep, we took about two breaths per step in order to keep our bodies moving. The wind was sustained in 20 to 30 mph range, and made temperatures above 6000 meters less pleasant than they already are. I can't say it was fun to hike up the never-ending summit plateau, but somehow we got to the top and collapsed for a few minutes of rest. It took us about 10-11 hours to reach the summit from refugio and another four hours to descent. One thing that surprised me is lack of crowds in the refugio itself. Stay for the night was only 21 (less than 10$) soles, or 50 soles if you include dinner. It featured 60 clean beds, running water, toilets, and other accommodations such as table games. Seemed like a no-brainer to experience life in luxury at 4,650 M! Aside from another couple of climbers from Europe we were the only ones to stay there. After we came down from the summit, we did not mind at all and collapsed in our beds a little past seven PM. On third day we hiked out and got back to Huaraz. Eating Indian food instead of Top Ramen was nice. Another few days of rest and we have a plane to catch. Hamik will continue his vacation in Squamish for another few weeks and I will go back to work. Even though I have never been to Squamish, and would love to climb in Bugaboos again, I am excited to resume living life of a weekend-warrior.


And Paris is a woman's town, with flowers in her hair;


And it's sweet to dream in Venice, and it's great to study Rome;


But when it comes to living there is no place like home.”

Posted by VividReality at 11:57 AM No comments:

After a not so successful trip to Laguna Cayesh Hamik and I needed some motivation to get back to the mountains. There is probably no better way to get psyched about climbing mountains than flailing on sport climbs, so we went to Hatun Machay. To our surprise there was a sport climbing competition which was set to start 30 minutes after our arrival. "North Face sponsored climbers from Lima are gonna be there," someone told me. Even though we do not really sport climb back in CA, and never compete in it, we decided to be open-minded and give it a shot. Competition involved doing as many routes as you can in four hours. Routes were given a certain amount of points based on difficulty, and participants were given a bonus for climbing the same route. We thought this played to our advantage and each climbed twelve routes in four hours (most in 5.10-5.11a range). Both of us led every pitch to get as many bonus points as possible. Highlight for me was getting to wear a 'gopro' on an attempt at "Fancy a Good Route" (5.11a). On a prior trip to Hatun Machay I onsighted it on lead, but took a fall following it on a following day. After minutes of huffing and puffing trying to figure out the crux once again, I got it clean. To our surprise we had a lot of fun. got placed 2nd in the competition and got some prizes as well. For the remainder of our trip we worked on some harder climbs and got our finger tips torn up - time to head for the mountains! 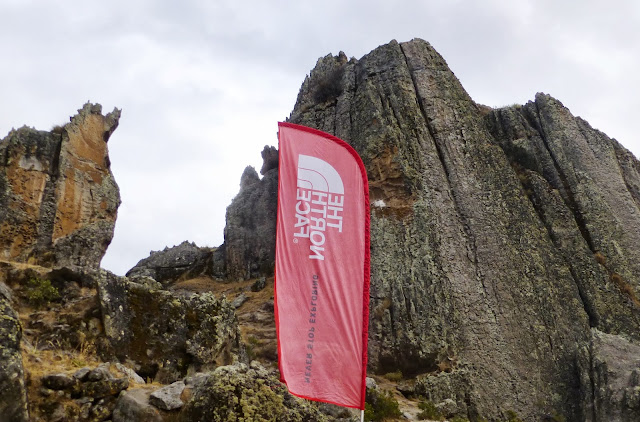 Peak of choice was Chopicalqui (6,354 M). When I started mountaineering back in 2010 I saw a photo of Chopicalqui's stunning summit pyramid and instantly put it on my bucket list. Seeing it at sunrise from Chacraraju was also incredible and strengthened my desire to climb it. The route of choice was 'normal' SW ridge. Climb wasn't technically as hard as our earlier ascents of Chacraraju Este, La Esfinge, or Alpamayo, but was physically exhausting due to altitude. Climbing SW ridge now has an opportunity to scope out the descent for East Face (route I hope to climb at some point in the future). Aside from high altitude this climb was a bit exhausting due to the style we chose. We got dropped off at about 4,100 M on day one and hiked in all the way to glacier camp at 5,600 M - approximately 4921 ft of elevation gain with 50 lb pack. Weather was unstable all day, but it begun to clear by sunset. One good news was erased by a bad one - Hamik got food poisoning and spent the night puking liquids out of every hole imaginable. Since the route we were going to do wasn't too challenging I decided to solo it. Starting up from tent after 4 am I made good time coming up. I saw headlamps of another American party about 1500ft below me. I felt lonely and really wanted them to catch up. But I kept on moving.
At one point I witnessed an incredible sunrise. Alpine glow hitting Huandoys was breath-taking. Just before that I got a little off route and traversed a very exposed slope under a giant cornice. When I was down-climbing I realized why I got off route - there was a 30 ft    step that ascending parties belayed. This step had a vertical bulge at one point, and was significantly harder than crux of Liberty Ridge. Since I did not have a partner this down-climb was a little spicy - right over a giant crevasse.  Huffing and puffing my way up I prayed for the summit to be over the next hill, but it wasn't, till I reached a short 70 degree snow step an hour or so later. Shortly after I got over it I saw the view that caught my attention a few years back - the summit pyramid! It was quite unreal to look at it in person, so I took a few photos and continued moving up. As I ascended there was another 25 ft snow step to get to the summit. After getting over it and hiking up a little more I was on top. Since Denali is 'only'  6,194 m, Chopicalqui became my new altitude record.
Views all around me were so good I took 20 minutes to take it all in. In the distance I saw Caraz I and II. Chacraraju Oeste and Este towered to the right. I saw Taulliraju, and on the opposite side of the peak were Huascaran and rarely climbed Ulta. Along with Cayesh these are some of the peaks I would love to climb in the future. I stood on the summit for a little longer and headed down. Since summit pyramid is so cool I took another 20 minute break sitting across from it. It was unreal. On the way down I caught up to a group of Americans and found out they turned around at the first steep step. When I got back to tent Hamik felt better and we decided to hike out. To our luck we got picked up by a bus heading straight to Huaraz and were back in town by sunset. 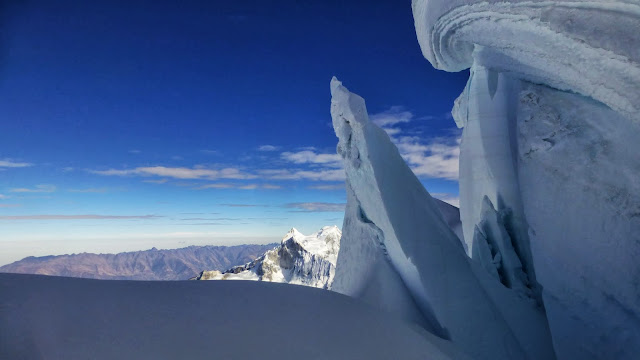 Posted by VividReality at 1:57 PM 3 comments: