Cathedral Peak seemed like a great objective for my 'opportunistic climber' friend Julia. The SouthEast Buttress is a sweet 5.6 with incredible views of Toulomne Meadows. A bit crowded, but how bad could it be on a Sunday with a 40% chance of thunderstorms? We can leave early and be done by noon...in the worst case it will be a scenic hike to Cathedral Lake. At least, that's what I told her...

With backcountry first ascents, onsight of the Evolution Traverse car to car, climbs of multiple 6,000+ M peaks and other things worthy of spraying under my belt, I did not expect the Cathedral Peak to be a difficult objective. Especially after I have free soloed it, along with Tenaya and Matthes Crest last year. Hell, I have hiked the Budd Creek trail at least five times over the years. 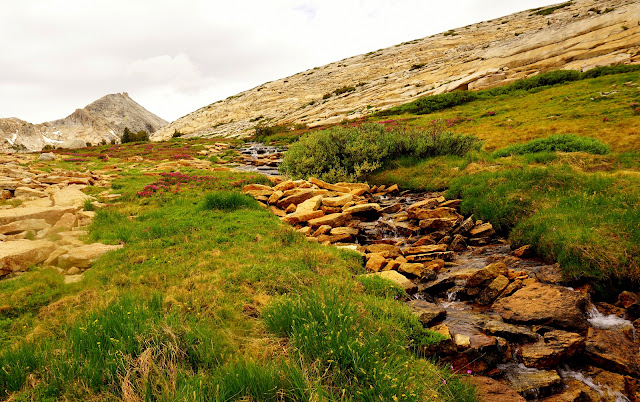 After getting up at 5am we started up the trail. It did not seem much different then usual, but after about 20 minutes of walking I saw a campground.  There were cars parked near the trail and people walking around with their coffee mugs. I was confused to what the hell happened, but my free GPS app suggested we hiked down to the visitor's center! I was totally confused. For an ego driven male with a liter of coffee in the system, defeat is not an option, neither is common sense. Instead of hiking back up the road and taking the right trail, I decided to cut cross country till we were back in the right drainage. We gained elevation. We bushwhacked. I was still confused to what happened, and I still felt lost because the trees did not allow me to see the surrounding peaks so I could identify our location. Some more walking brought us face to face with a beautiful looking buttress. Was it Cathedral? It did not look like it, probably because it was not. The Unicorn peak was directly above us with Cathedral still a ways to the west. 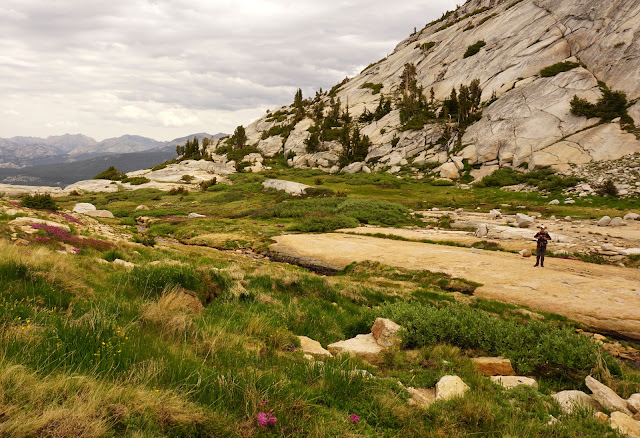 The buttress looked large and worthy so I proposed we do some adventure climbing. Julia said it was up to me, and I got fairly excited to climb something I know nothing about. As we hiked further to the base the views opened up and we hiked through a beautiful meadow with a clear stream running down it. We got to the base and I racked up. Since we planned for Cathedral, I brought a spartan rack of singles to a #2 camalot. Taking a direct line up the buttress we made our way up. I had fun. Placing a single cam on the first 60 M pitch and four on the second, I also had a benefit of finding an old pin. The weather was getting a little iffy and Julia realized it was not 5.6. : ( For the last cruxy pitch I took majority of weight and wore one of the packs to make her life easier. It was a 5.9+ish vertical crack with not much cheater holds.
When we did top out on the summit, the views made up for the suffer my friend had to go through to get there. Well, at least I hope they did!
The descent through slot canyons was adventurous and enjoyable. When we got home I was curious to see what route we have climbed and the Secor guidebook suggests it was the Direct North Face (II 5.8 A3). I was not able to find any info about repeat ascents but thought the climbing was no harder then about 5.9+ish. Those looking for something off the beaten path will be rewarded with no lines at the base and some original views of the surrounding peaks.
Posted by VividReality at 1:24 PM No comments:

When I saw the comments section under Mark's Charlotte Dome trip report, my eyes nearly popped out of their sockets. "Mamma Mia! The sunlit arête splitting the Ericsson Crag #3 looks incredible! Too bad all these people on the internet are talking about it being unclimbed....Damn! It won't be unclimbed for long!"  :(

I asked Mark and his partner Scott to see a bunch of other photos and kept salivating studying different features of the arête. It was steep, there was an obvious spire on it and a clean headwall two thirds of the way up. The line is bad ass! Unfortunately, last year I found a 2,200 ft project on the Bubbs Creek Wall. It took all my energy and I simply did not have the time to make it out to Ericsson Crags. Fortunately for me, a week prior to this trip, I was able to free climb that beast. Now that I am liberated....WATCH YO LINE BROSEF!
Fortunately we live in CA where 99.5% of climbers do not know of life outside of a guide book, 0.1% focus on first ascents in Sonora/SoYo, 0.1% consider a walk to Pine Creek to be an approach, 0.1% are injured/old/on supertopo, 0.1% work too many hours and other 0.05% had a second baby. 16+ mile approach from the trailhead kept the people away and the classic line on the peak has a whopping three ascents, ever! The peak had less than 10 ascents since the new register was placed in 1991! To be honest, the people are MISSING OUT! This was one of the most scenic approaches I have done. A great trail for 90% of the way with straight forward cross country route finding - no bush whacking bullshit. In his 100 Favorite North American Climbs book Fred Beckey describes Vinland, a line he and Alan Bartlette climbed on the North Face as "one of my finest in the Sierra." That is quite a statement coming from the man who climbed...like everything! The rock is a lot better than the photos I have seen would suggest.
My good friend Maxim and I started early on Friday. From Road's End Ranger Station up Bubbs Creek, to Charlotte Creek Camp. We dropped off our stuff and climbed the first 8 pitches of my new route the Emperor which is another mile up the trail, on the Bubbs Creek Wall (TR coming SOON to the hood near you!). The Emperor is stacked with quality free climbing and guaranteed quality pitches even if we don't find anything on Ericcson Crag #3.
On the other hand, I needed much help from my morning coffee and an mp3 player to get my ass to the base of that wall. The raging mosquitoes kept the pace up as we hiked past the East Lake. As I mentioned above, the scenery was drop dead gorgeous. I love being out there in the backcountry and appreciate ALL the views, but this spot was especially pretty. Views of North Guard, Brewer, South Guard, Table Mountain, Midway, Genevra, other craggy peaks, Lake Reflection, streams, clear as a tear drop alpine lakes, flowers and meadows. Yeah, no wonder Beckey did not mind to hike there twice!
First thing you notice as you approach Ericsson Crags is that it looks steep and intimidating, so I turned up the volume - TURN DOWN FOR WHAT! There was a lot of Slipknot and Metallica but their songs do not bear many exciting titles that I wanted to associate with this climb. The thing was simply ongoing fun that kept my attention all the way up, but never got too desperate. I found a sweet direct start below the arête proper -  exciting moves to a steep hand crack which felt like a 5.10c due to a flaring, but very well protected crux. A bit of a traverse right with a move over a bulge got me over the gnar and onto easier terrain where I built a belay on a great ledge, with a rock to sit on. Beautiful.

Climbing, aesthetics of the line, rock quality and scenery aside, what makes a climb great, for me, are good belay ledges. This one has plenty. Pitch two traversed right and up to a roof which is directly on the arete. It looks unlikely, but there are awesome orange hand holds that allow you to pull the roof with not much trouble. I could have gone further left, but pulling a roof on the arête, seemed damn fun at the moment. I tried to keep to the arête as much as possible and found a lot of hand cracks and lots of great rock all the way up the route. A lot of great rock for an alpine ridge that has never been climbed that is. If you are thinking of getting on it, don't expect to find Positive Vibrations, it is more of a Fishhook Arête type of an outing! Lots of cruiser ridge climbing with plenty of well protected 5.7-9 cruxy sections. One can decrease the difficulties by dropping off the crest, but why, you hike a long time in to climb right?! :) TURN DOWN FOR WHAT! 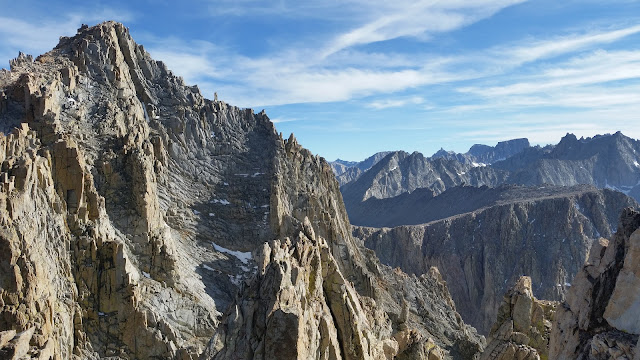 Two thirds up the route we finally hit the white granite spire which extends out of the mountain like a giant...fang. I did not want to drop down from the ridge to bypass it, and was psyched to find a few moves of overhanging hand jamming on the right side, which took me directly to the notch between it and the wall made up of featured red rock of lesser quality. Before moving on, I summited the spire and dubbed it Lil John - YEEEEAAAAAAHHHH!! Turn Down For What!!!! Remainder of the pitch got me to the base of a clean and steep headwall which seemed troublesome from the bottom, but there also was an obvious splitter at the top. After some looking around I found a  way to climb it starting on the left side in a fist crack which took me to the left side of the formation. After about 30 ft of climbing on the left side I was able to step back and transition to the middle of the thing. The beauty of climbing awesome in-cut black knobs on a steep headwall, in the middle of a First Ascent is hard to describe, but it was basically AWESOME! These positive holds and intermittent cracks allowed me to place good pro and took me to the final splitter, which was a cherry on top. Kaboom! Intimidating but not even a 5.10! TURN DOWN FOR WHAT! 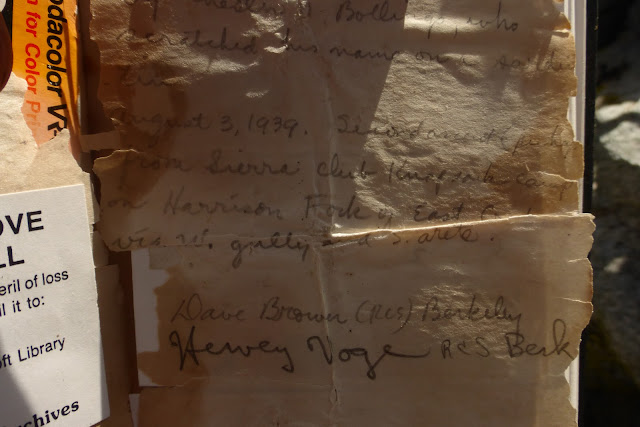 Bonus story: as we are hiking out on Sunday, I ask Maxim if he wants to check out the Boyden Cave on the way out. He asked me how far away is it, so I told him it is a few miles down the road but there is a 10 mile hike to get to it. His reply was "Oh," with not even a "maybe not a good idea after hiking 40+ miles in the last three days. Yeah, the guy is not from this planet. TURN DOWN FOR WHAT! 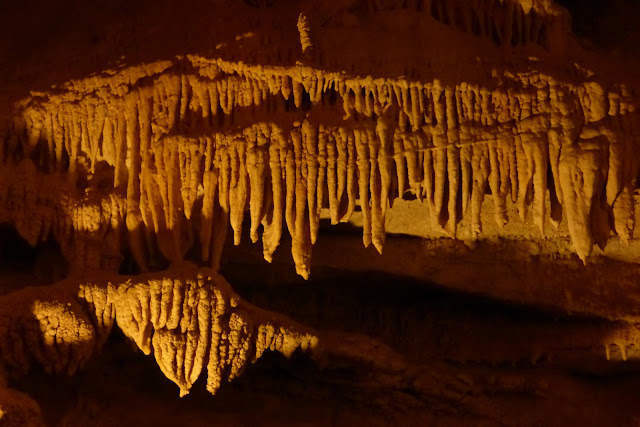 Hope everyone is having a great summer so far! Stay safe, hang out with good friends and get some good climbs in!
Posted by VividReality at 10:56 AM 1 comment: