"What distresses me is to see that human genius has limitations, and human stupidity has none."—A. Dumas


As I pulled in to a gas station close to my home in Visalia, CA I noticed a man throwing up close to the dumpster a few hundred feet away. He looked to be in his 40s, was wearing a colorful dress up shirt, tight leather pants and white shoes I could see from a mile away. All of a sudden he made a noise similar to one I'd imagine a bull to make after getting shot in the stomach. Even though I grew up in San Francisco, home to one of the largest homeless populations in the country, had exciting teenage years, worked in the ER for the last 2 years and thought that by now I would be exposed to all sorts of buffoonery, what came next shocked me. The guy begun to take off his leather pants! If you can imagine wearing a tight latex condom covering your lower body, you would understand it would be difficult to take off if sober, especially if the condom wasn't as stretchy, yes? Now imagine a drunk clown covered in vomit doing so. It seemed like a job for several sober individuals, not him! After the initial thought of wtf, I wondered 'where are his friends?' 'Why is he so wasted on a Sunday night in Visalia, at this random gas station?' While I enjoyed the show for much longer than it took to fill my gas tank, the dude managed to expose his ass, take a shit and fall over in the vicinity of his vomit, still half wearing his leather pants. All the two other people at the gas station were entertained and though wanting to see where it goes, I knew it was close to 9PM and I had a long drive to Whitney Portal and a big climb tomorrow. I wasn't particularly rested after returning from Chalten, working several 12 hour shifts in a row and didn't actually know if the idea of onsight free soloing one of the most difficult mixed routes in the Sierra in such state is actually dumber than what I witnessed at the gas station. The worst case for the gas station dumbass, are IV fluids in the ER where I work. Me on the other hand, can end up in a body bag. No more climbing, no first world problem whining, no netflix and chill, no nothing. Closed casket. If I believed in afterlife, maybe I'd be ok with this option, but....and so I went.

After getting to Lone Pine around 1am, I didn't get much sleep, yet woke up way later than I should have. At 7:30am I drank some not warm coffee, ate snacks and left the car at 8. Reading the report about the first ascent of the Winter Chimney a few days later I realized the FA party woke up at 10:30PM, meaning I was either very late or very early. Whatever the case is, I walked up the road, below a large south facing wall and up the avy tracks on the south face. Earlier start would allow easier travel as the snow was getting softer, but at least I saw where I was going, that should help right? After several hours of post holing and dry tooling over a rock band that would be 5.7 in climbing shoes, I hiked and hiked and hiked till I was about a thousand feet above the spot where I was supposed to cut off right. I realized that I was going up the original Winter Route couloir. So I considered going up that original route or bailing. Neither options had me as excited as the Winter Chimney, so I down-climbed and turned to the right couloir. By then, I was alternating between punching through knee and hip deep in places. Slowly I got to the base some time in the afternoon. I was afraid to look at the clock because if I saw something like 3pm I would have to turn around. The technical bulk of the route is only 6 pitches, so I decided I will likely be able to climb it in a couple of hours at most, as I am not pitching anything out.

First pitch was a nice wi3- or 2+ as advertised but the 2nd had rotten snow above the chimney which did not look like it would support any weight at all. To the right I scoped a crack system that seemed maybe doable and connecting to the ice above the corner, up above. To do a first ascent on a free solo is not something I was planning on, but I told myself that I can always try to down-climb if I have to. I did have a 6mm tagline and a few cams in case I felt it was too difficult to climb down. I climbed a few moves of sketchy ice to a stance below the crack system and executed a set of delicate moves to get established. It felt m4ish and the climbing turned out to be really good. Axe and hand jamming up a nice crack. If I had climbing shoes, I'd be able to get nice foot jams, but ice climbing boots did not do as well. Topping it out I enjoyed more easy walking and climbed some more ice to the M3 overhang, which was chocked with rotten ice. Climbing without being belayed through rotten ice was fairly hairy, as I had to avoid most of it and stem out on little edges. It all worked out and I continued to a wild squeeze chimney that was capped by a very exposed M4 overhang, with more sketchy ice over the lip. Using rock climbing shoes would help me a lot here. The first winter ascent party had the leader change into rock climbing shoes to climb the upper part (crux overhang) yet rated it M4. I got this detail after reading the report about the first winter ascent. Having the M4 rating on the pitch, I expected they rated it as such after drytooling it, but it wasn't the case. In any case, a friend of mine climbed the route a few weeks earlier and reported not changing into rock shoes, but he reported much better ice on the route than I encountered. A few weeks made a big difference and after I got above the chimney and below the big overhang, I sat there for a while trying to figure out a sequence of moves that I had to make. I could not afford to fall there. Don't want to make it more dramatic than it was, but it felt more difficult and insecure when I climbed to and through the overhang and I wouldn't do it if I knew how insecure it was gonna be. After getting through, I felt like I won a world series, a superbowl and a lottery at the same time. Staying alive feels good! I wasn't totally done with the actual climbing and the corner above had nothing resembling solid ice, so I continued to dry tool for the last pitch and when I topped out the route, I saw large dark clouds and precipitation above Mount Langley, over the canyon to the south. With only about an hour and a half of daylight left, I hurried up the slope, as getting down was gonna take time.

Stumbling over soft snow, I was getting worked breaking trail. Occasionally punching through close to my hip. The descent took forever, even though I mostly found my way alright, as I have done the descent last year. One route finding error send me over a steep drop off, using an established rap station, which led me to set up two more raps down a vertical wall step. The most annoying part was punching through every step of the way back to the car, where I arrived around 9:30PM. Much later than anticipated...the guy puking in the parking lot would have a good laugh at my foolishness. 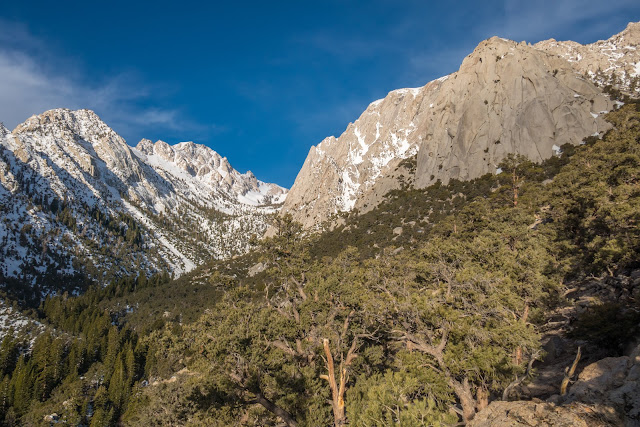 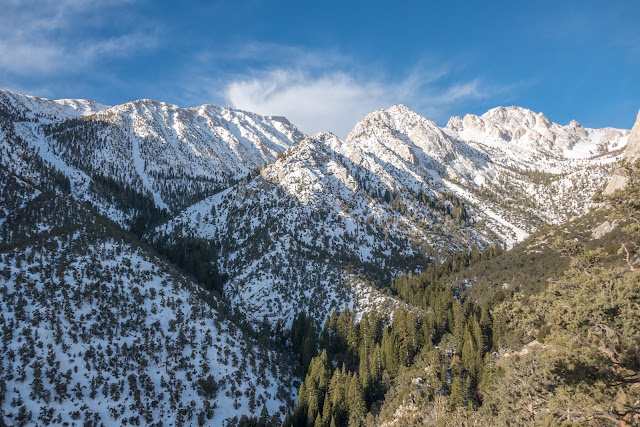 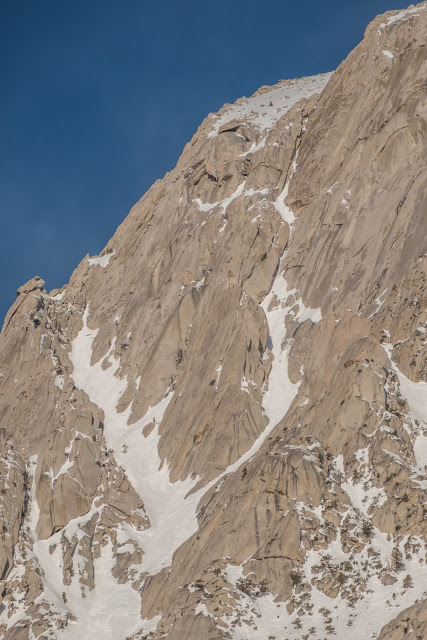 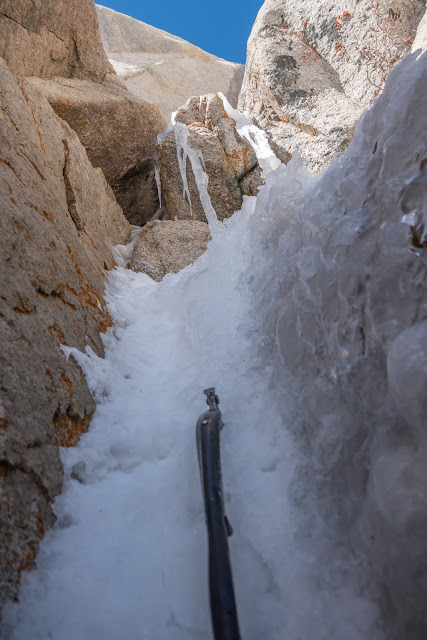 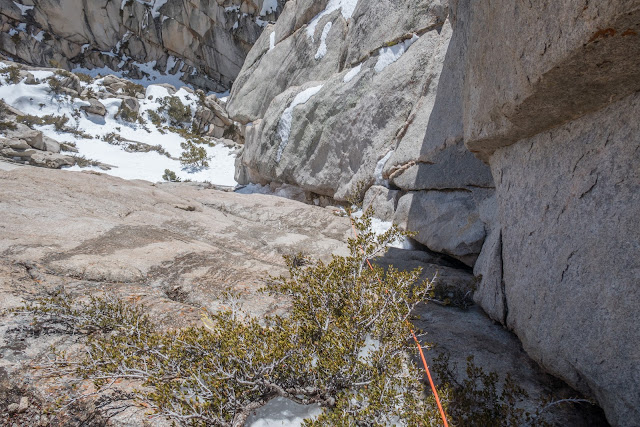 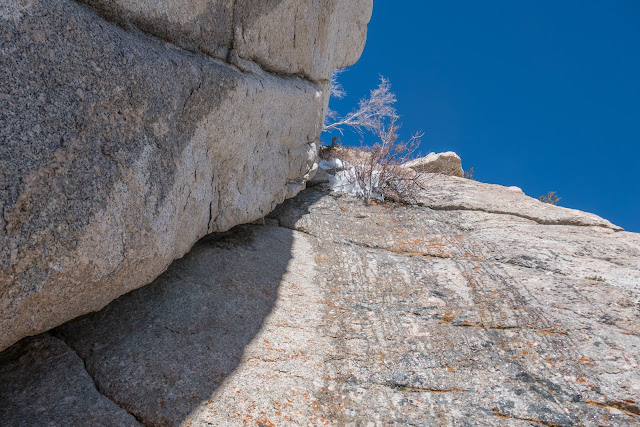 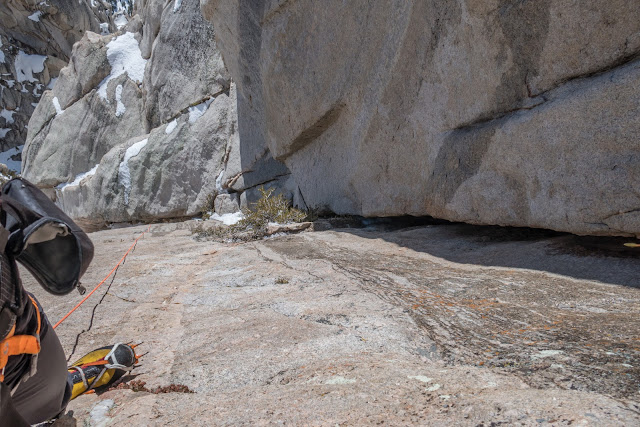 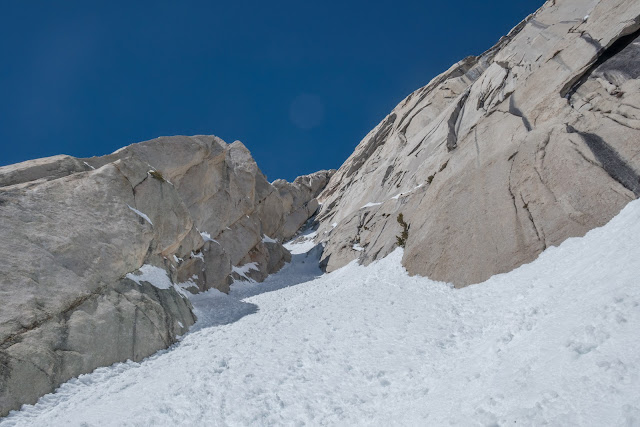 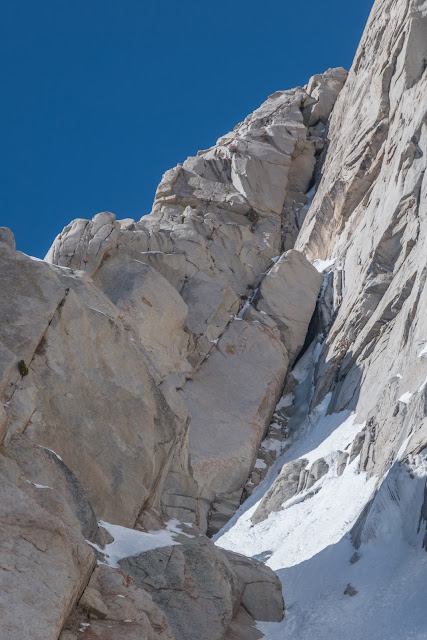 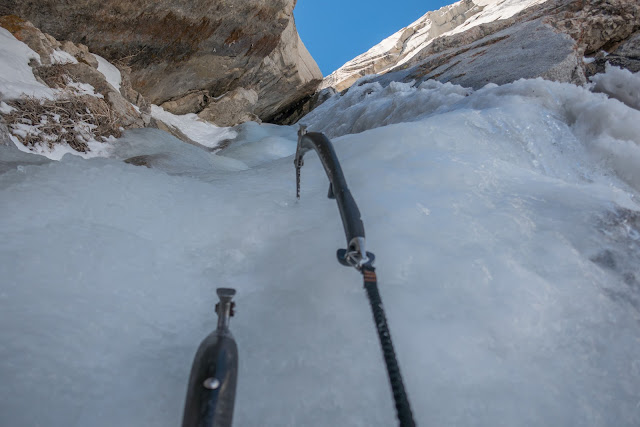 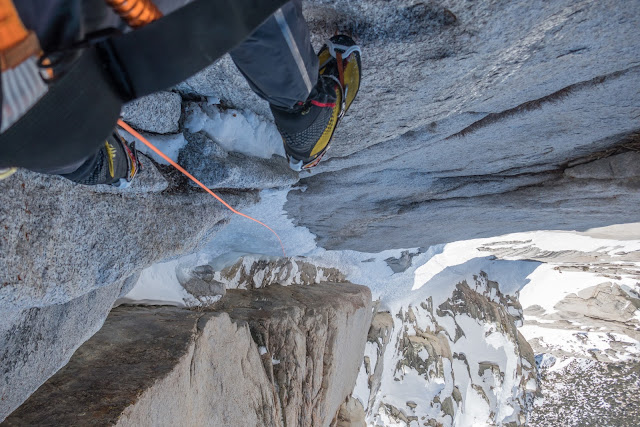 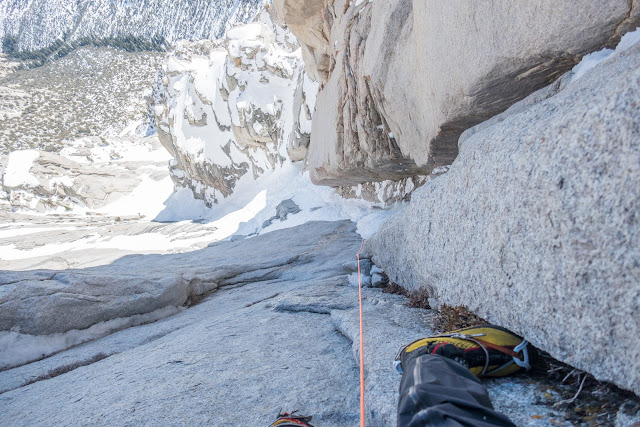 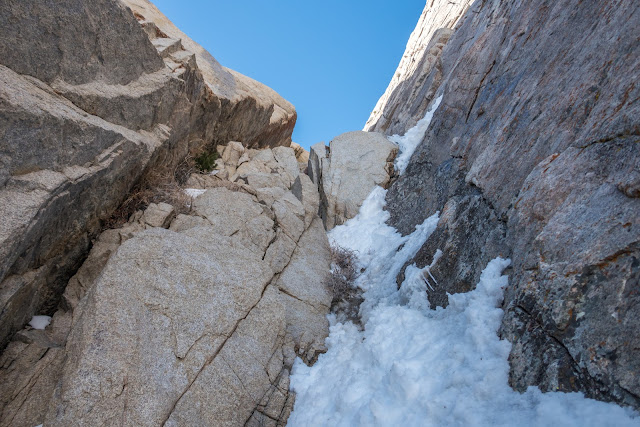 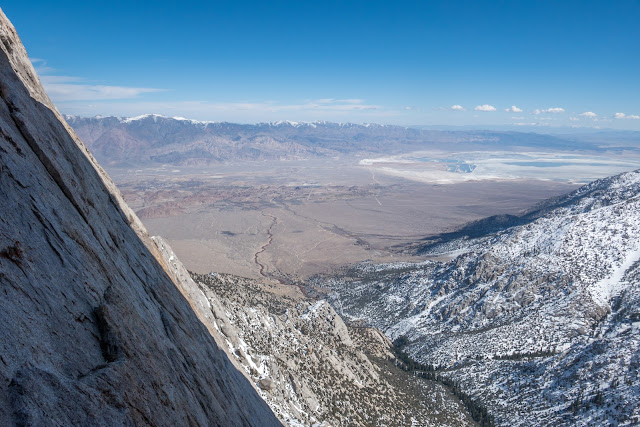 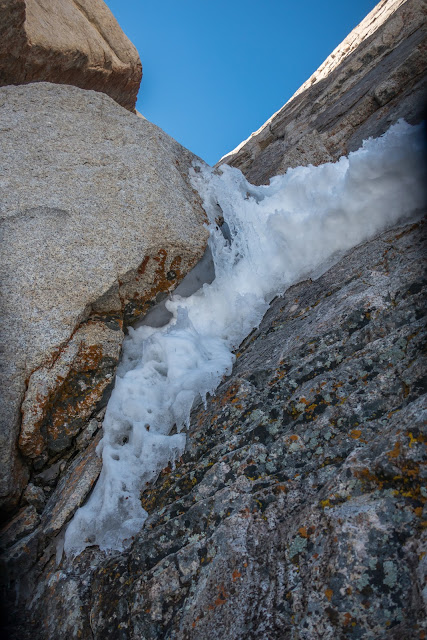 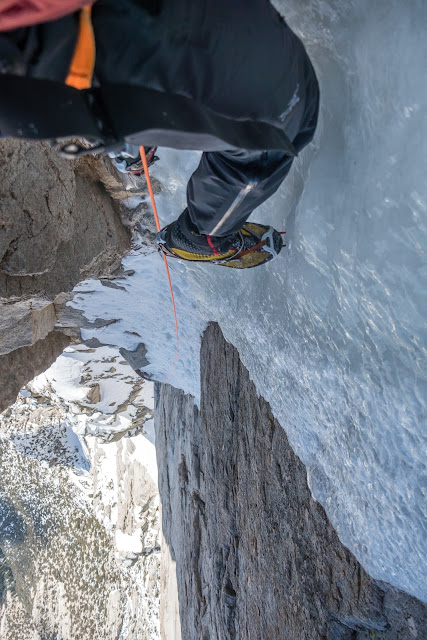 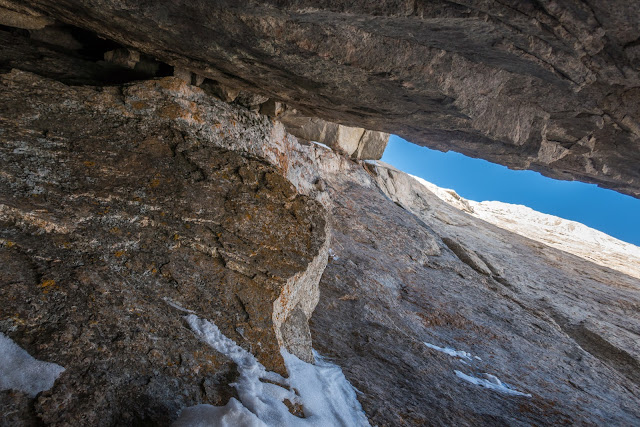 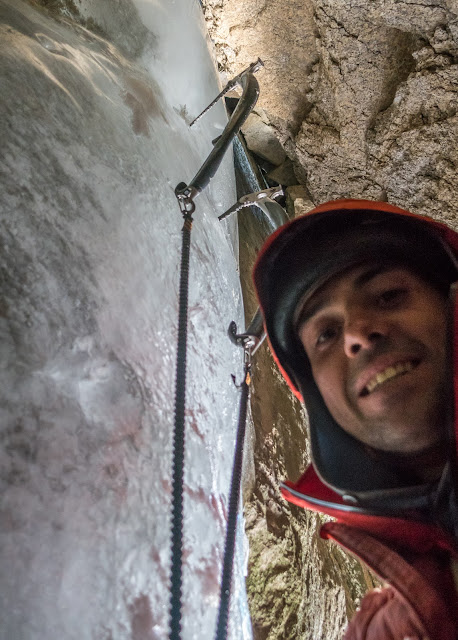 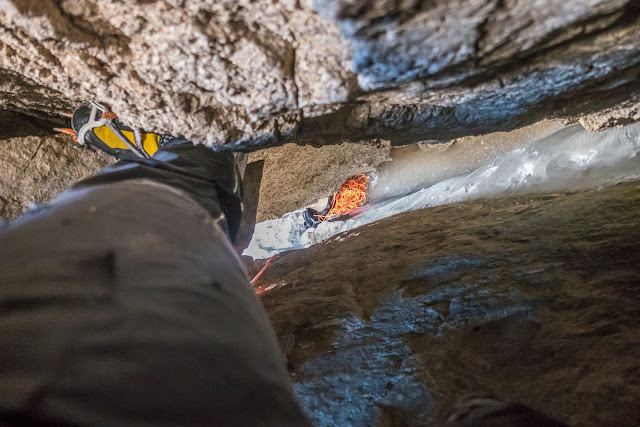 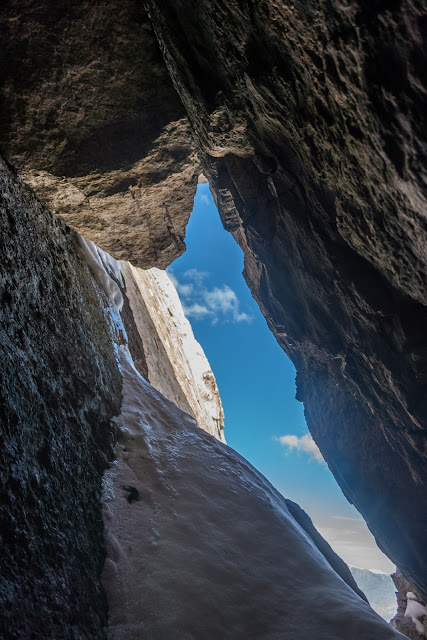 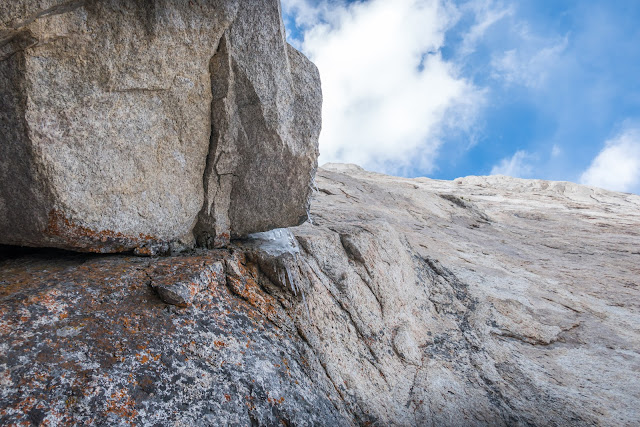 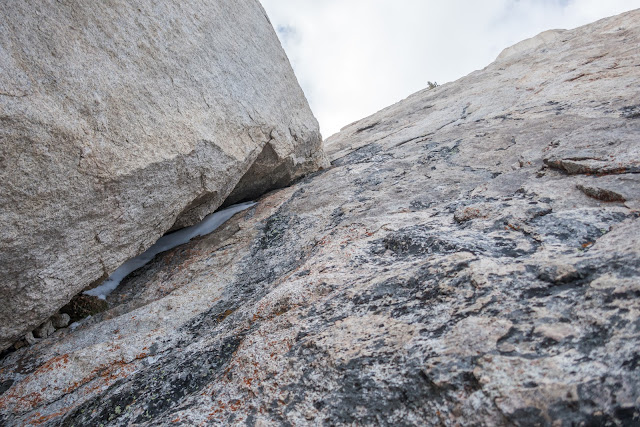 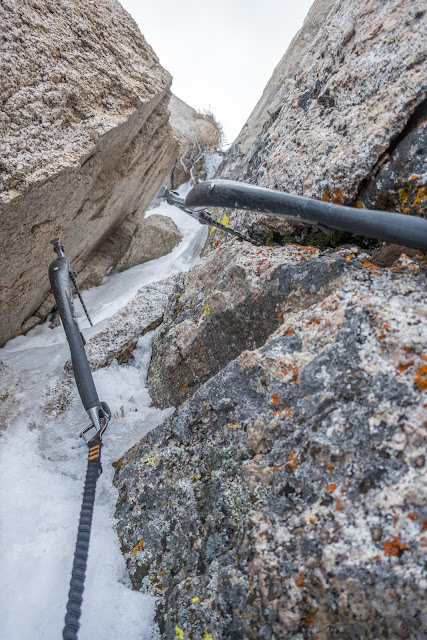 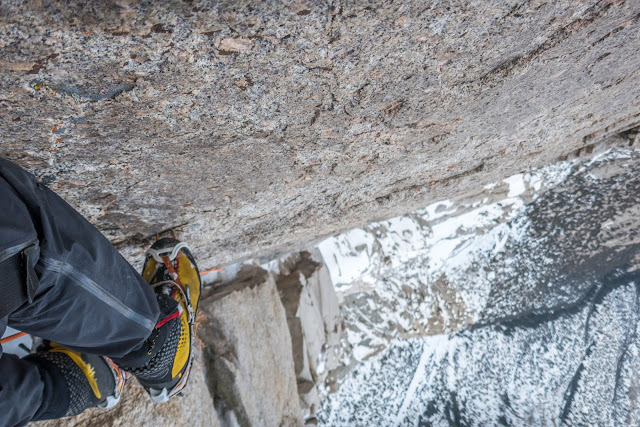 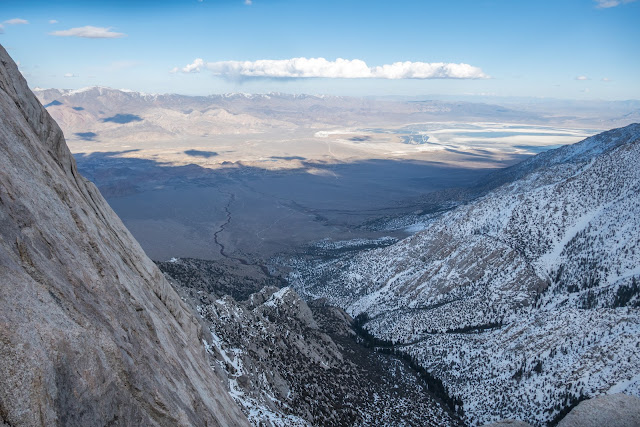 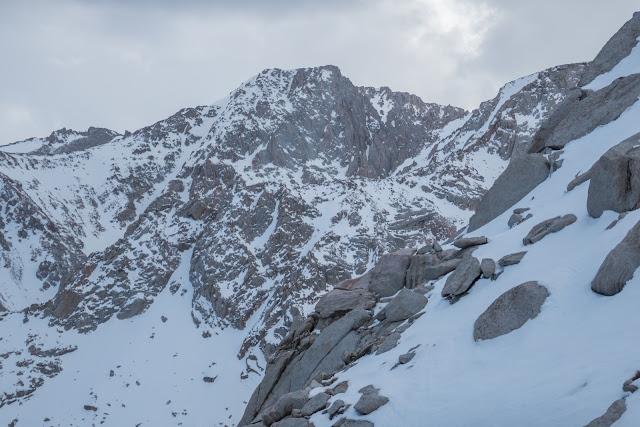