This trip report does not relate to climbing in any way, yet is about a rare event that happens in a place many rock climbers find special. For those, who have not heard of the Moonbows in Yosemite, I highly advise to google it and come check it out for yourself in 2019! Not doing myself a favor by advertising the event and possibly making it more crowded, but hell, I have gotten shit for advertising walls with climbing potential. I am of belief there will be enough space for a few more people and it could be very excited to witness something a little less rare than the Horsetail Firefalls, yet as worthy and as spectacular.


It was a random stormy April day and I was deep in the rabbit hole of internet when I came across something that I became curious about. It was a photo of Lower Yosemite Falls with a colorful rainbow spanning in the foreground, above the booming waterfall were stars - it was a night shot! How could a rainbow be out at night? After some more investigation, turned out several other Yosemite waterfalls have been photographed in a similar fashion, but several things have to line up for these shots to be possible:
1) The waterfall has to be out in full force (duh) and create enough mist to reflect the light of the moon.
2) The weather has to be clear to allow the moonshine to reach the waterfall.
3) The moon has to be full or nearly full in order to light up the waterfall with enough force.
4) It has to hit it at a particular angle to create the rainbow and can only happen during certain months of the year and during certain hours on different days.

Well, when is the next window to view the event, I thought, and found a well written schedule -

DAMN, IT IS TODAY AND TOMORROW!

It was fully raining in Visalia and there would be no chance in hell of seeing it today and the forecast for tomorrow did not look promising. I googled the event some more and found out about different angles that could work for the shot, as well as the settings some of the other photographers use for it.

The weather did not improve much in Yosemite, as the webcam showed dark cloudy sky, yet NOAA allowed for glimmer of hope with "partially cloudy" prediction for the evening. I was not sure what to do, as the drive to Yosemite would be three hours one way and I had to work the next morning. The moonbow is a night event, so I would be arriving home very late in the night and getting only a few hours of sleep. For some odd reason, I decided to take slim chance and go for it.

After a long drive, I noticed the sky was cloudy, yet there were a few patches of blue. When I went to set up, I was one of the few people there an hour prior and set my tripod in an amazing spot below and infront of a bridge, however a few minutes later one of the photographers present told me I would be ruining the shot for the 50 or so people that will show up later. I didn't even think there would be anyone else there because of the forecast, but set up in a spot more accommodating for the crowds. The dude was right. In less than an hour it was hard to find a spot to stand! The Moon was covered with clouds for most of the night and the conditions weren't perfect due to a passing storm. However, many photographers that came out were rewarded with short windows of moonshine that allowed a few decent snaps. The Moonbow itself did not come out as strong as it could have with better conditions, but I am hoping to be there the following year. Not only to photograph the Lower Yosemite Falls from different angles, during **hopefully** a better weather window, yet the Upper Yosemite Falls from different aspects. There are so many ways to be creative photographing the moonbows, that one could come out for 50+ showings and still think of new creative ways to compose a future shot.

My photos were shot with a Sony A6000, a mirrorless camera. Now that I upgraded to a Nikin D750, I am hoping for better conditions and a better capture of this phenomenal beauty in the future. If you google this event, you can see many other ways and photos edited by professionals that are much more stunning. I personally was very happy with my first attempt and staying the duration of the evening, even though I got only 3 hours before waking up for work. #coffee_official #sleep_when_youre_dead

Hope some of you will come out and see it for yourself!

My favorite composition, shot from behind the bridge. Favorite, because it is original and shows the event as a whole, including the rainbow, the waterfall and all the people on the bridge. The exposure was good too, with the water getting enough light to show beautiful colors. The stars came out as pinpoint features. One thing that is good about the clouds, is that they prevent the sky from being boring. Now to get the sky with some clouds on the North side of the valley, with enough space to show off the stars, but totally clear on the South side in order to get stronger moonshine...mmmhmmmm some day! :) 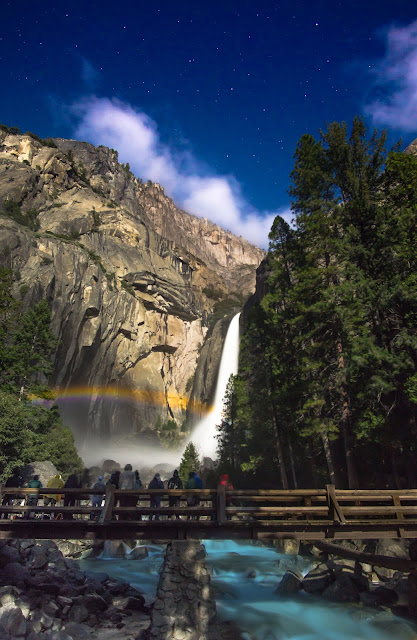 A few other angles that came out OK. 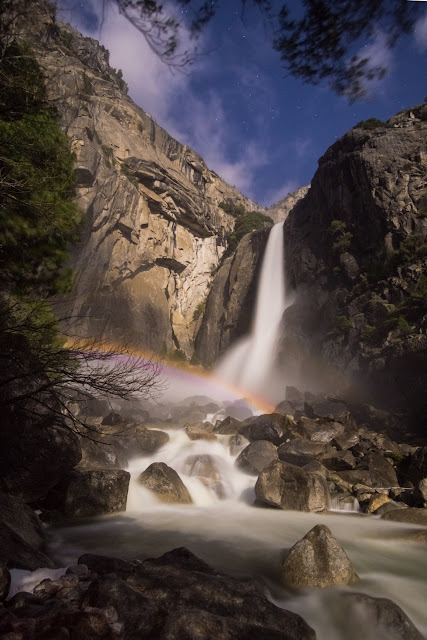 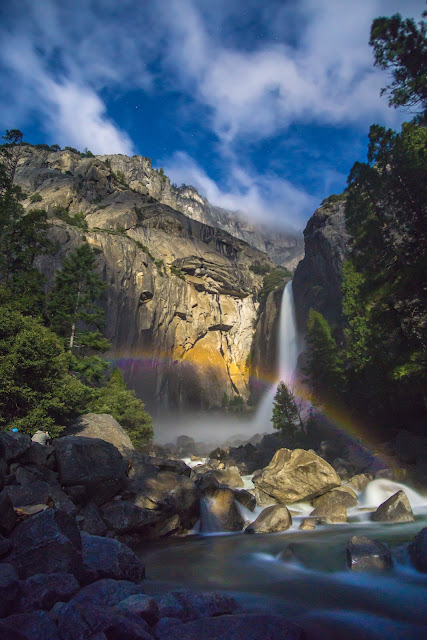 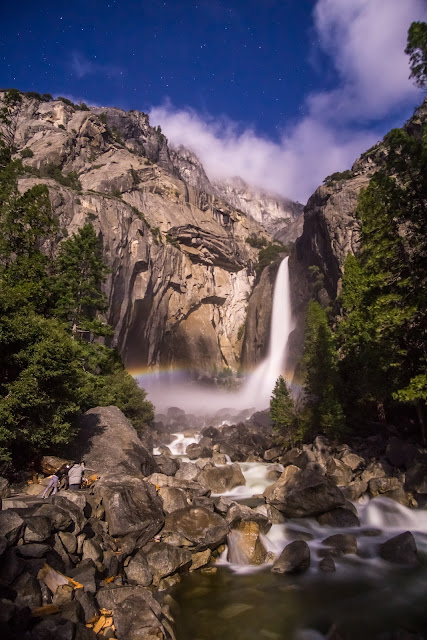 I do want to improve my astrophotography. These two were taken in early November and the milky way is not as strong as it is during summer months. Yet I love all the lights from the climbers on El Cap and the fall colors illuminated by the passing car. More practice and a better camera/lens combination will hopefully help too. This was a stitch of three photos taken with Sony A6000, Rokinon 12mm f2.0 lens set for 15 second exposure, f2.8 at 6400iso 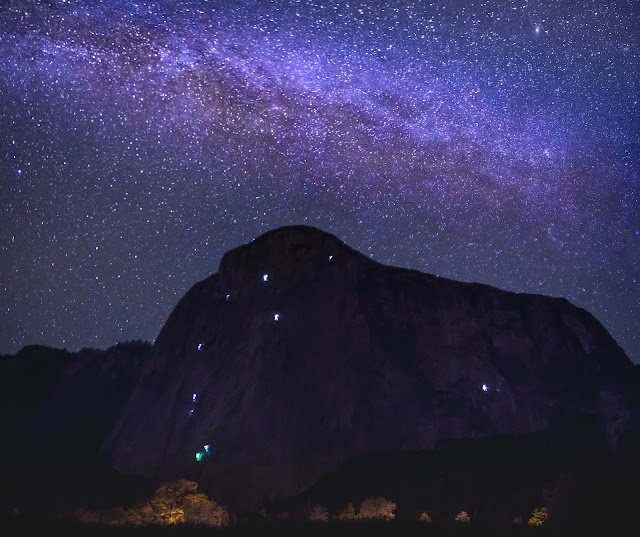 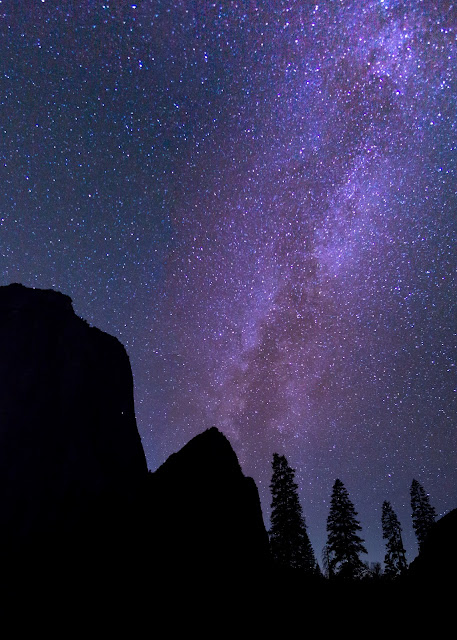 Some other photos from this fall 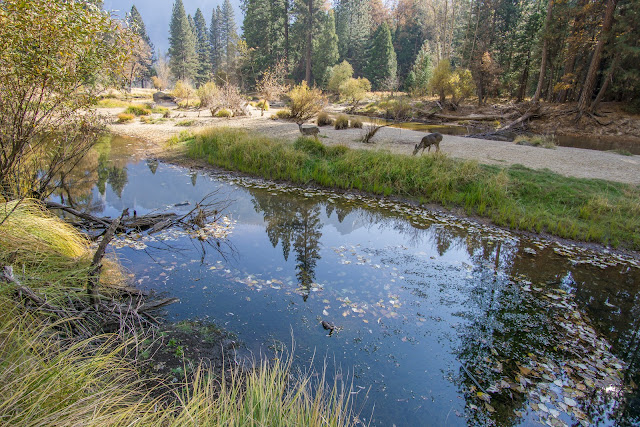 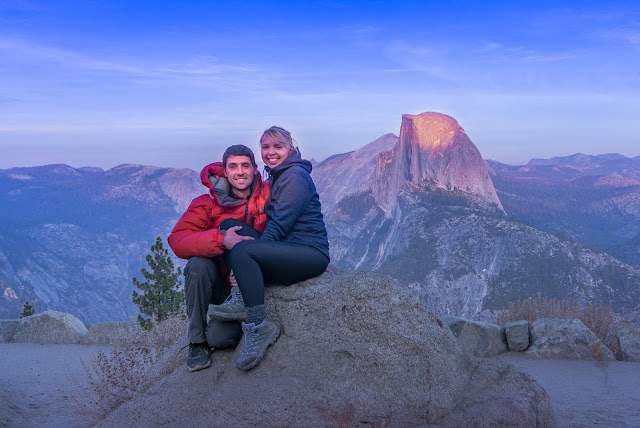 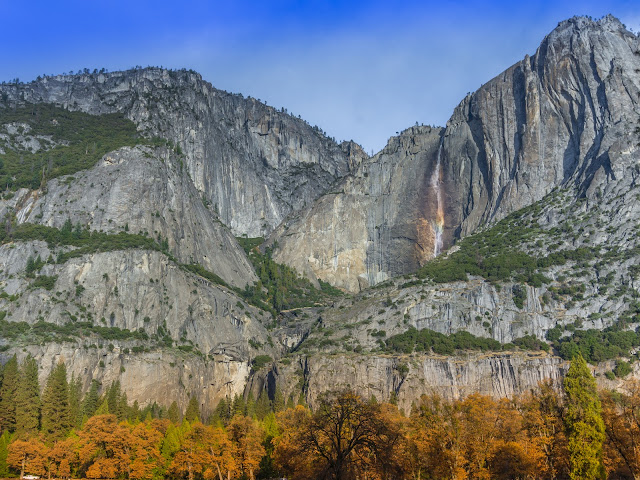 Yosemite Tunnel view before sunrise. This spot is more photogenic during sunsets. 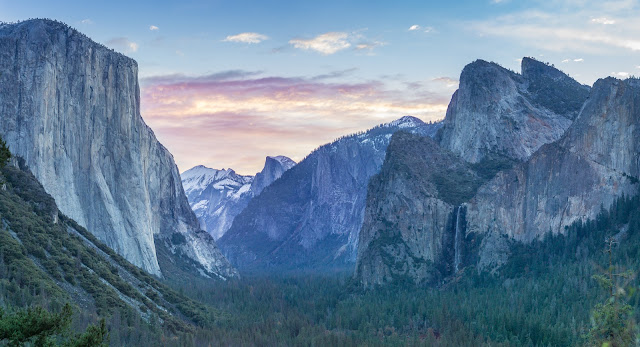 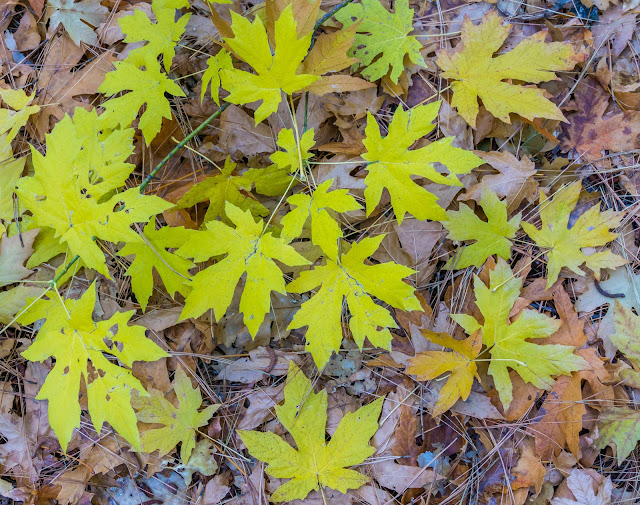 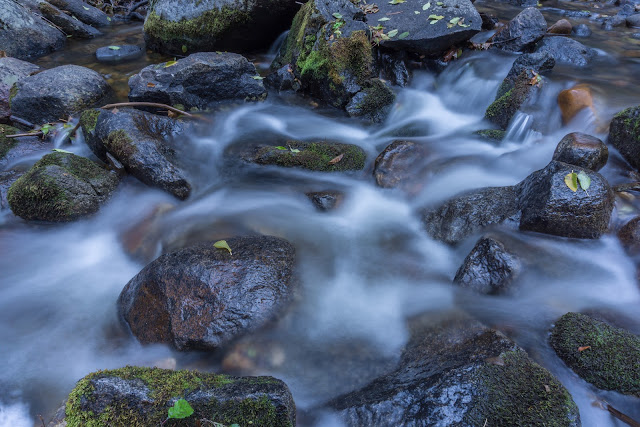 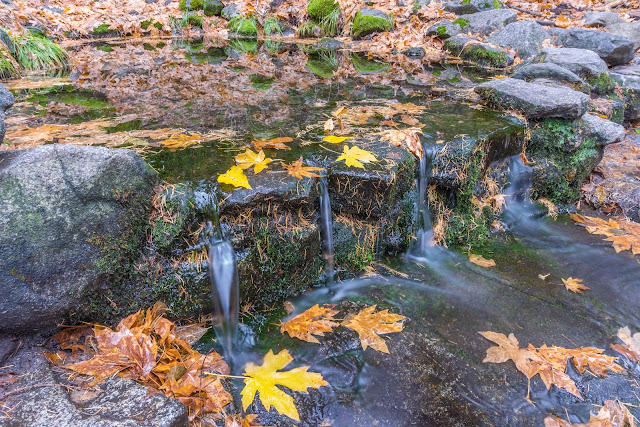 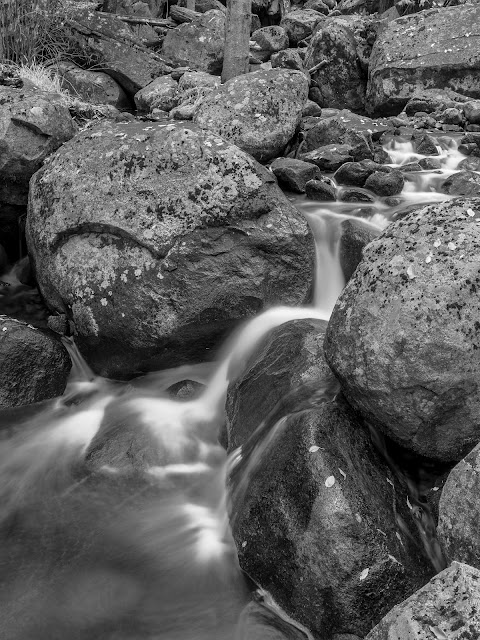 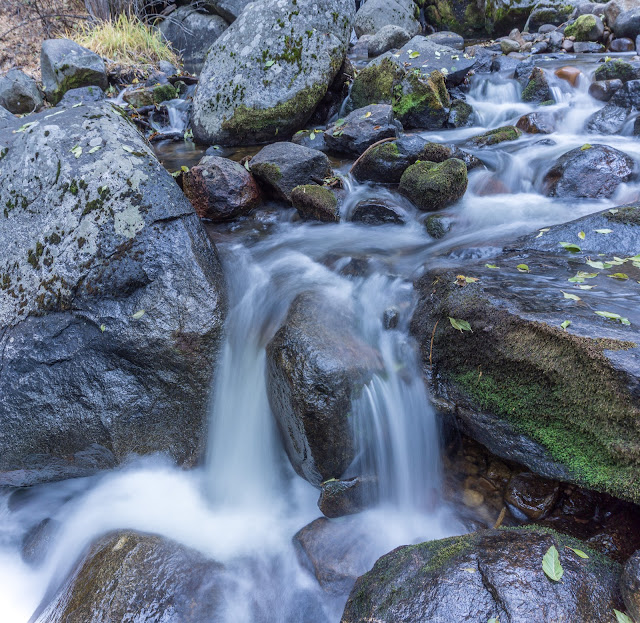 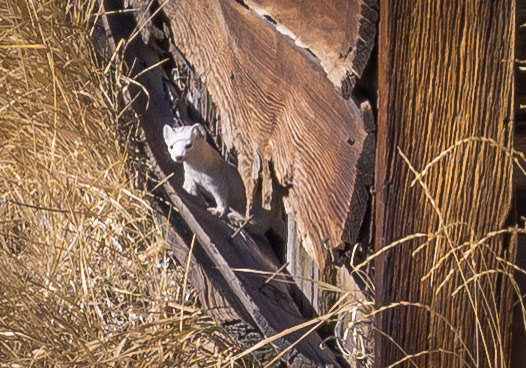 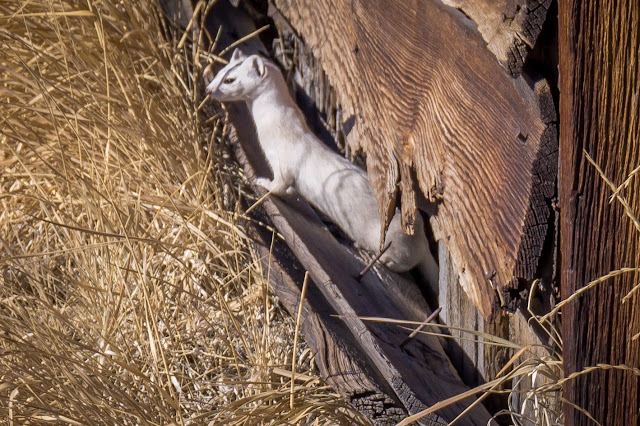 Posted by VividReality at 3:12 PM No comments: