Castle Rock Spire. As a novice mountaineer who liked challenging objectives, I stumbled upon its summitpost page late in 2010 - "arguably the hardest peak in the High Sierra." I had no idea what "IV 5.9 A2" meant, back then 3rd class was hard enough. But the peak looked stunning - the seed was planted. Over the years the spire's striking appearance evoked all sorts of emotions in climbers from different generations. It's elegant yet rugged, as intimidating as it is inspiring, though highly desirable, it is forbidding. Personally, I think it has a mystical allure to it. Rich history and a variety of stories of failed attempts led local climbers to label it as "cursed." The slim summit register that reads as Who's Who on prominent climbers in the North American history is a testament to the challenge offered to those who dare. Even though climbers salivate looking at it from Moro Rock and there is no lack of hype about this formation, less than fifty people have stood on the summit.
Over the next few years I focused on improving my rock craft and met a few similar-minded people. Adventure climbing and new challenges appealed to us. We planned to climb the Castle Rock Spire in 2013 but when schedules did not align, I ended up in Peru while Tom and Daniel completed an aesthetic First Ascent. Not only was their line a direttissima going straight up the sheer East Face, it also had a rich history behind it. The first known party which attempted to climb the formation tried it via this line but backed off after making a bolt ladder and running into further trouble. This party included John Salathe and his home-made hangers are still in place. Honestly, I was super excited about what my friends have achieved, but partially sad to miss out on such a mega adventure. Furthermore, I had no other immediate partners lined up to climb the thing. Finding partners to crag in Yosemite is not as challenging as finding a dedicated soul to rely on deep in the boonies! 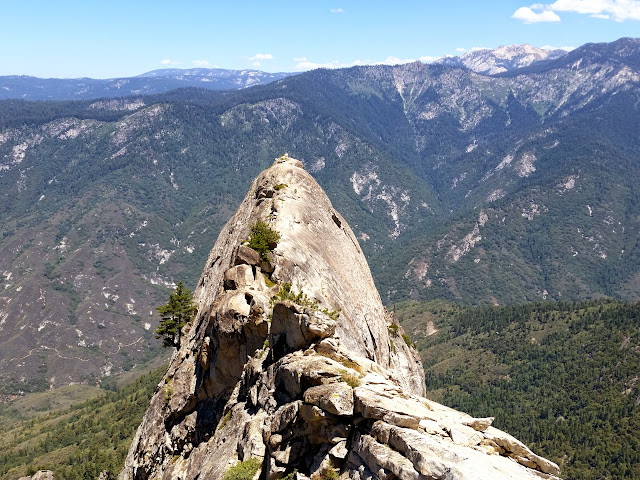 While scrolling through Daniel's report, I saw a comment posted by Clint Cummins, "How soon do you think Vitaliy will go up and free it? :-)" It was an interesting question which made me wonder what is the guy smoking?! In mid 2013 I was a not-so-solid 5.10 leader, and had no chance in hell to free something my friends have aided. However there was a spark of hope, something to aspire to. To me, climbing wouldn't be as exciting if the outcome was guaranteed. How awesome would it be to free a second route on Castle Rock Spire? The original route tried by the Salathe himself! To do a a second ascent seemed awesome enough! Armed with little hope and a partner opened to type two fun, I tried to free the route the following year. As expected, approaching from Atwell Mill campground and climbing the route in the same day was too much. My attempt to free-climb was short lived, second pitch had me hanging and flailing. Attempt to work out the moves on top rope was equally humbling. The desire to summit vanished, it was time to admit the defeat. Even though we hiked out empty handed, seemed like both my partner and I gained much satisfaction from exploring the notorious area for ourselves. To have an opportunity to see such a magnificent peak with my own eyes was worth the hike. In addition, while bailing from the top of the second pitch I noticed another crack which seemed like an alternative way to free climb the face. I lost a lot of calories on that outing, but the hope was still there!


Well, the summer was around the corner and the desire to have another stab at the spire was through the roof. My friend Max was interested to check it out. Great thing about Max is that he does not do much research. If I told him we are climbing a great route, like the North Face of the Eiger in Kings Canyon, he would shrug his shoulders in approval. About a year ago we were driving to Yosemite to climb the Rostrum, thirty minutes from the parking lot he opened the guidebook - "Oh wow, 5.11c? That's hard!" Life is much easier for a Honey Badger. Max seems like the human version of one. He did not give a shit about the Castle Rock Spire's history, curses, difficulty, the notorious approach. In fact a day after we climbed the thing he was calling it Castle Dome. Anyway, of course he did not mind that it snowed two feet in the High Sierra a day prior and was happy to belay the hard pitches. To my surprise, the area did not get much snow and approaching on the cloudy day was quite pleasant. We found some mushrooms on the way in and Max prepared an awesome soup. Aside from not giving a shit, he is a cook.
We got an early start and were at the base of the spire in two hours. The first pitch went without much trouble and we moved the belay to the base of the crack I scoped on the last attempt. To avoid the drag I plugged no protection on the initial handrail traverse. The climbing above was awesome - 30 meters of low 5.10 hand jamming. Third and fourth pitches were the business. These were the other two pitches that required direct aid or hanging on the first ascent. The third got hard straight off the belay. Bouldery moves on OVERHANGING terrain. Somehow I got to a thank god hand jam on the left without taking a dive. This seemed like a 5.11- or something, for tall people, but the true crux was ahead. Another bouldery bulge which took all the strength I had. Without much in the tank I couldn't place more gear without pitching off so I kept on climbing till I reached a desperate stance from which I plugged a piece of gear and exhaled. Not sure what the hell to rate that, but 5.11 BURLY seems right. Of course it could be done as a straight forward 5.9 C1 for anyone who wants to climb the spire!
Even though I was happy to get pitch three out of the way, the fourth, although easier, packed plenty of BURL. Cool chimney to a wild slot roof. My long legs are hard to control while boudering overhangs in the gym, but they saved my ass on this one! I was able to find a stem and avoid fist jam campusing through the rood. I plugged the green camalot just above it and went for it. Lucky that we did lot's of thin hand jamming in Indian Creek a week prior. Placing no further pieces, I managed to mantle into a flaring squeeze chimney. With my last gear likely ten feet but seemingly miles below I tried to get something off my harness but the awkward nature of placing in a squeeze did not allow me to clip the rope. In about five minutes I finally clipped, which allowed me to position myself into a no hands rest. It is funny how security of a piece at your waist adds confidence. Another physical flare and a layback got me through to the final moves. I was drained and happy to clip the anchors. Nothing was gonna stop us now! Short pitch of "hardcore 5.6" in a corner had us high fiving on the summit.
Being up there with a guy who took me on my first hikes, belayed me on my first lead at Lovers Leap and taught me to use crampons back in 2010 made it that much special. Over the years we have gone from learning to snow camp, to climbing Whitney and Rainier. Now we were on the summit of Castle Rock Spire taking in the views along with warm rays of sun. At the moment the place did not seem intimidating at all. There was a typed up summit log which included men like Salathe, Steck, Beckey, Powell, Wilson, Leversee, TM Herbert, EC Joe, Brutus of Wyde, Galen Rowell, Mike Sherrick, Anton Nelson, Dave Nettle and many other pioneers that gave schmucks like me some inspiration to step off the beaten path. It was special being up there knowing I entered the select group of people who pioneered something on the Spire. It was not as mysterious as doing an ascent of a completely new route, but there was plenty of mystery trying to onsight pitches of unknown difficulty in a remote location. My grandmother used to say "everything that happens, happens for the better," it is hard to believe at times, but if I topped out the spire a year prior, who knows if I went back? I guess there is some wisdom to those words.


For a place that is supposed to be cursed our day was too awesome! So awesome that I found a heart-shaped balloon on the way back to camp! My Valentine's day present was late, but it has arrived! There was enough gas in the canister  to hydrate our dinner but the next day's breakfast was consumed in a dry form. That was no problem, we got more mushrooms on the hike out and had a celebratory feast at home. After taking a dip in Lake Kaweah and realizing that one more dream of mine became a reality - Castle Rock Spire, East Face goes FREE! (III+ 5.11 B or 5.9 C1). 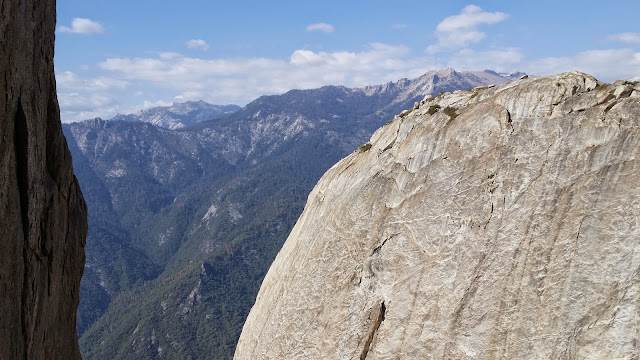 Few reasons why I think this route will become the new standard way up the CRS:
The approach does not involve much bushwhacking, poison oak or difficult route finding!
The climbing is good and the rock is solid!
It climbs cracks all the way, so plenty of pro to plug in!
Line of ascent takes a striking direct line up the East Face!
Thanks to the FA party, the route can be rappelled with a single 70 M rope and has perfect rap stations!
Climbing the line is like going to a museum - where else can you see the original Salathe bolt ladder?!
There is no way to get lost on this one. Even without a topo the line is obvious.
Cruxes are safe and easy to french free through.
There is a good water source in camp as of 5/11/2015
Posted by VividReality at 11:52 AM No comments:

Supertopo Indian Creek Gathering - NO REST FOR THE WICKED!

Thank you to everyone who participated in the IC gathering! Thank you for the good company, stories, food, tips and your presence no matter if we got to hang out much or not! Special thanks to Jim and Angela for organizing the gathering, getting the campsite and getting that Turkey. Hope we can do it again around Thanksgiving!
Posted by VividReality at 10:15 AM 1 comment: