Castle Domes have been on my list of places to visit for quite a while. Per Secor and the AAJ the only recorded climb in the area was done in the late 1970s by Jack Roberts and Mark Menge – Silmarillion. Recently I resumed my research and the only semi-useful thing I found, was a thread I started in 2011. Good looking rock, high adventure factor and a giant approach – time to have some fun!

My friend Caitlin had a 3-day weekend and was game to haul 50 lb backpacks up a 13+ mile approach. Great thing about it was that it follows a section of Rae Lakes Loop, which is one of the finest hikes in the High Sierra. After a reasonable day of hiking, we set up a camp in a lush meadow with a jaw-dropping view of Castle Domes. The line that made the most sense was a striking arête that went from the base to the summit of the most prominent formation. In addition, the research did not turn out any record of someone doing it prior. Even if someone did, the first ascent experience is hard to beat!
We woke up early and approached the climb by threading the wall under the slabby buttresses and striking overhangs. There seemed to be a possibility to climb a few three pitch 5.12+ routes, but I don’t climb that hard and wanted to get on the line that made the most sense. SE Arête was without a doubt it.

At first, I scrambled to the summit of a sub peak across from the arête and scoped out a line. The lack of visible crack systems and multiple roofs did not inspire confidence. However, we did not make the long haul to give up without a battle. After a few spicy moves a ways above my gear, I climbed up into the main dihedral and we enjoyed quality climbing for seven long pitches. Quality of rock was incredible. It was like someone mixed dark gray granite from El Capitan’s East Buttress with featured slab of Charlotte Dome and than added a bit of High Sierra crack climbing. A geologist with interest for petrology would have a blast on this one! Every pitch had an interesting crux, usually an overhang with ‘thank god’ jugs  around the corner and a cool feature or two.  At one point I came across a giant inverted dike that traversed across the rock as far as I could see. Castle Domes and other granite formations in the area had more than a few of these features.

A few pitches from the top we begun getting some light rain. At this point climbing up would be much easier than bailing down, so we kept moving. A cool chimney, short hand-crack, another overhang and a pitch of low 5th, took us directly to the summit! With approximately 1,100 feet of technical climbing behind us, our reward was a bit of sunshine, snacks and the view of Gardnier Basin. Turns out Mt. Clarence King has a stunning North Face, but approaching it would take two days at least!

The summit had no signs of previous passage, even though I have no doubt people have visited it before. We made a cairn, snapped some photos and headed down to our camp. My celebratory meal of ramen mixed with beef jerky was enhanced by green onions, which were growing next to our tent. We drank plenty of fluids and Caitlin passed out. I had too much excitement and emotions about the climb we just did and had a mostly restless night. Too bad, since the next day started out with a bang – wind, lightning, thunder and a downpour chased us out of the valley and back to our car.

During our return we saw many more potential destinations for future exploration. Even though the golden age of picking the obvious gems in the High Sierra have faded, the opportunity to get creative and explore will exist for many years to come!


Sunspot was one of the few classic routes that I HAD to get on this season. It shoots up the middle section of the Incredible Hulk through a series of steep corners and cracks. Trip reports and word of mouth suggested it was a sustained route and I was a bit intimidated by everything I have heard. To get a good night of sleep and avoid all the useless worries I decided to not look at the topo and swing the leads after one of us gets going. One person would end up with two 5.11a pitches and the other would get the crux 5.11b. Seems like a fair load no matter how you shake it. 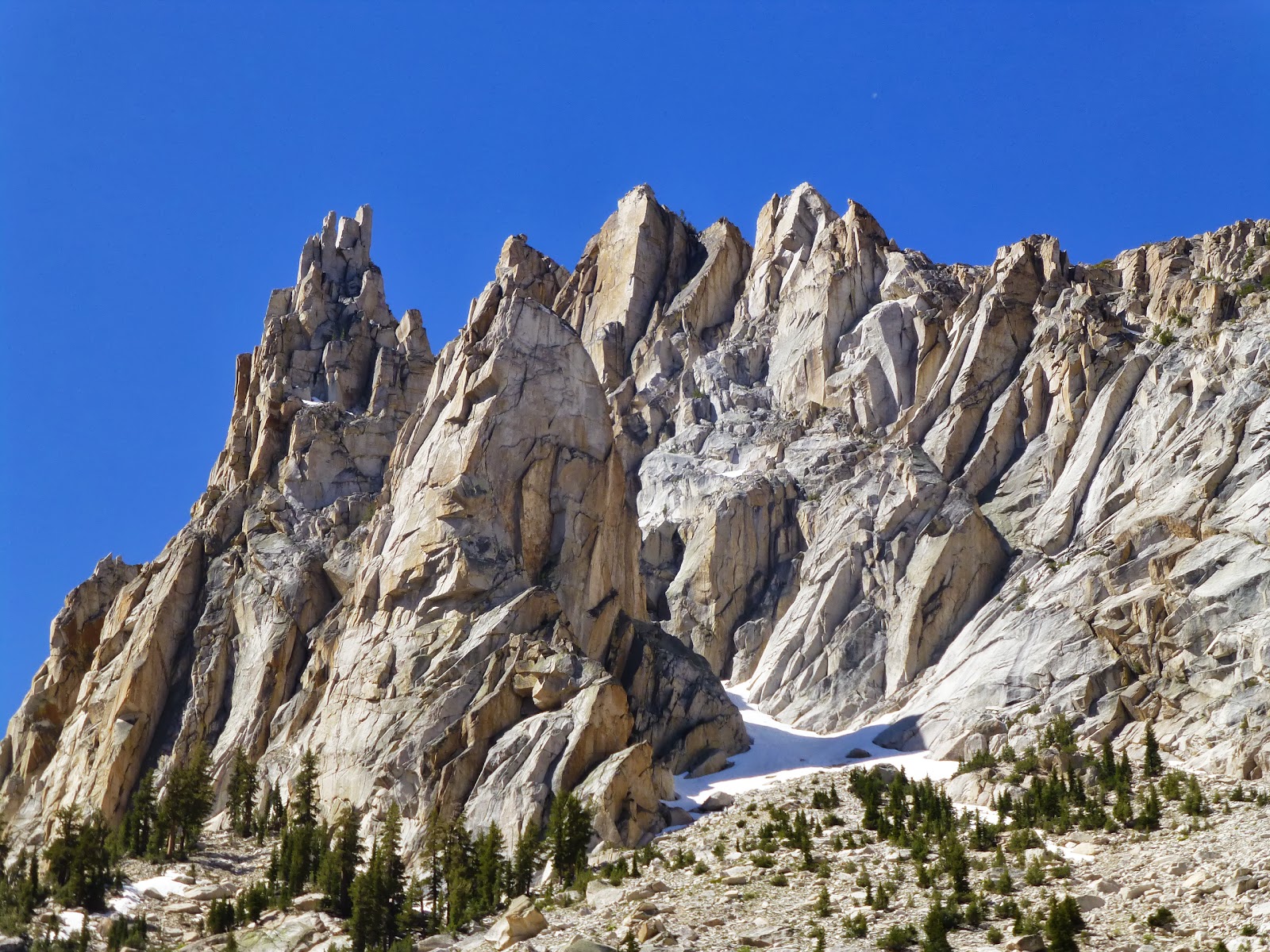 We had two days off and no permit, so we decided to day-hike it. The hike in is short and we made good time. We were at the base after about two and a half hours of hiking. There were three (!) more parties that joined us shortly. All were day-hiking as well. Thank god they were climbing Positive Vibrations and we had the route to ourselves. We are not super slow, but when it comes to climbing things at our limit, it is nice to not feel rushed. 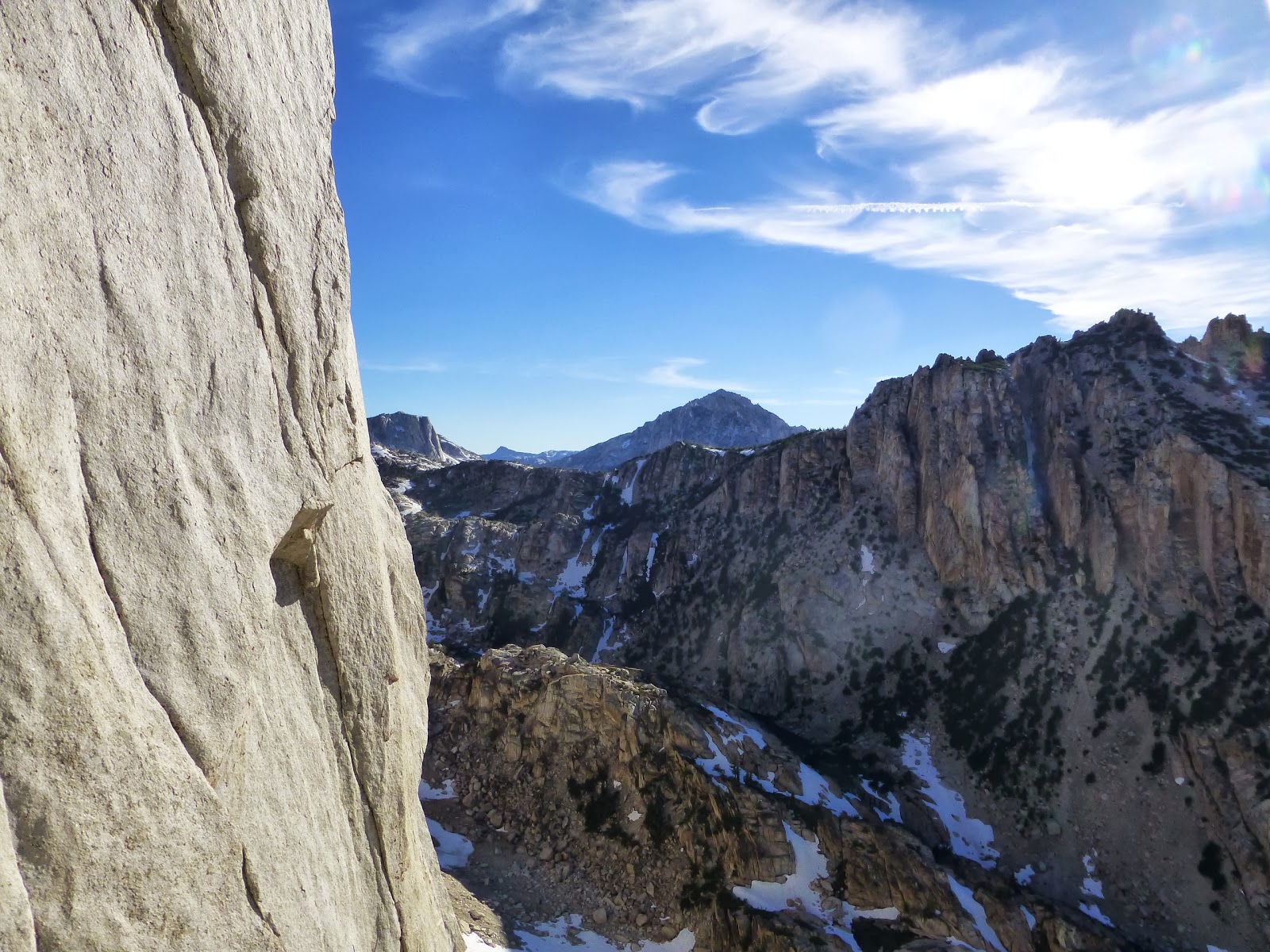 When I joined him on top of pitch three, I was pretty sure the pitch above would spit me off. Not only did it not spit me off, but I spent like two hours leading it. It was 180 feet of sustained stemming, jamming and laybacking – 5.11a. There are some “one move wonder” pitches that are rated 11a, this is not one of them. By the time I was done, I felt pumped, tired, pumped, hungry as hell, sleepy and pumped. Since I have above average fingers and hate laybacking the pitch felt slightly harder than enduro corner – no long hand jamming sections, no perfect stances for a no hands rest and much more distance. Cristiano followed it like a boss and took the crux pitch. While following, I stemmed my way past the two bolts and did a powerful gaston into a layback to pass the crux. I thought 5.11b on top rope should be manageable, but this one took everything out of me and than some. After the crux section, the corner was restored to life and I laybacked and jammed my way up to the top. Next 5.11a was more of the same laybacking. Even though I was fairly beat from sustained climbing below, my fingers went in well and I made ok progress. Cristiano took the next pitch and did not find the easy 5.9 path advertised in the topo. Way he took had a cruxy step right across from the arête that felt like a solid 5.10 to me. Maybe I was too gassed to know the difference, but soon we were on top of the climb and setting up the rappels. 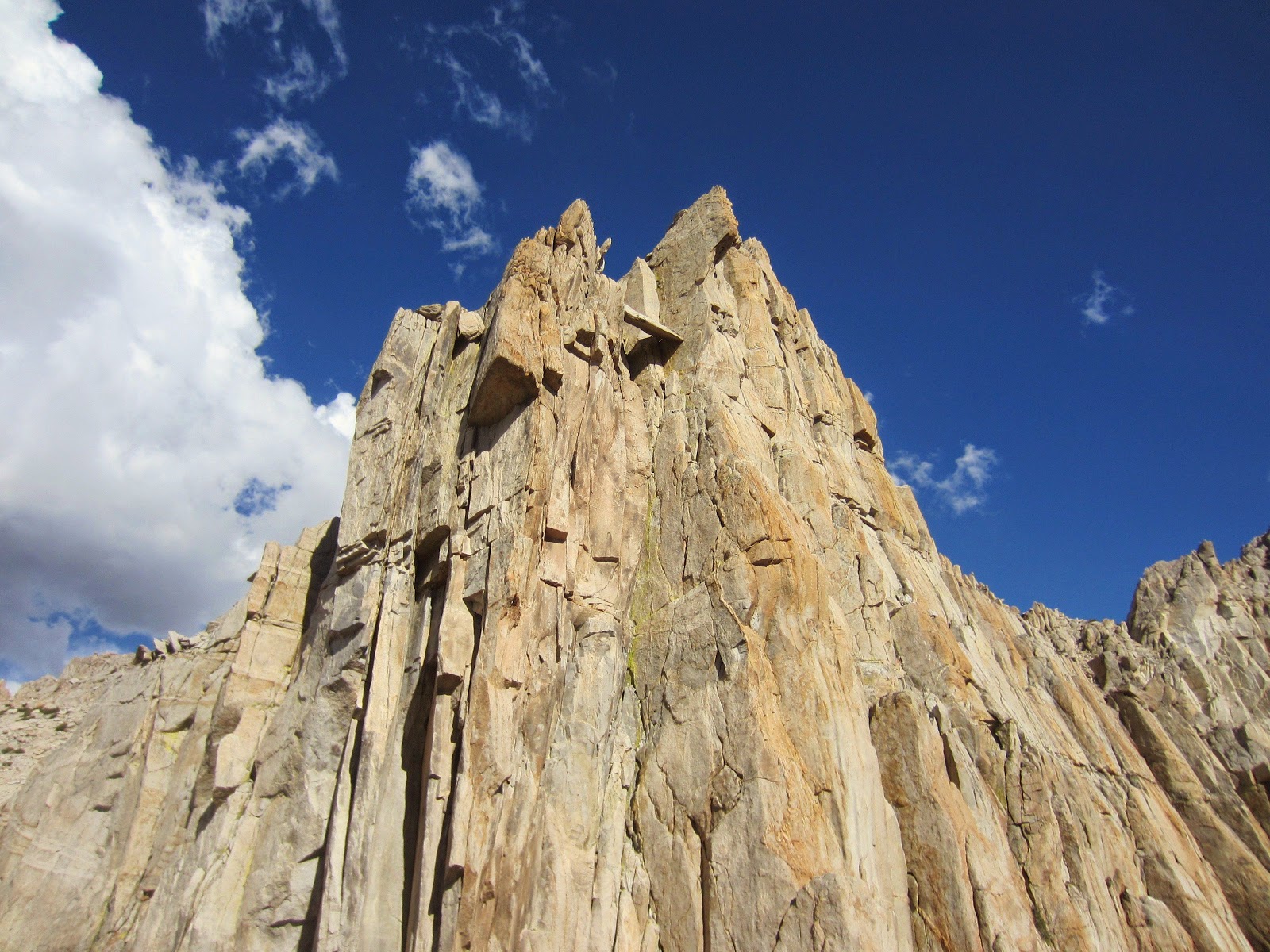 This climb was sustained, difficult (for me), had climbing of amazing quality and on an awesome peak. I liked it so much that I hope to do it multiple times in the future. It was a lot more sustained than PV, and I hope to get a bit stronger so I could climb the route without feeling super insecure on most of the pitches. Even though I did the route without falls or hangs, I would not be surprised if I climbed it next weekend and end up hanging on the rope multiple times. Sorry for lack of the photos from the climb, but I forgot to place a memory card in my camera. Without a memory card my camera was able to only take two pictures total! Rest are from previous trips to the Hulk. In any case, this route is bad ass, if you can, GET ON IT!!! Doing it car to car allowed me to watch the World Cup Final and to consume a load of some really unhealthy chicken wings. Now that I have the hardest route in the High Sierra (per supertopo) ticked I will either retire from climbing or focus on doing first ascents. :)
Posted by VividReality at 11:49 PM No comments: